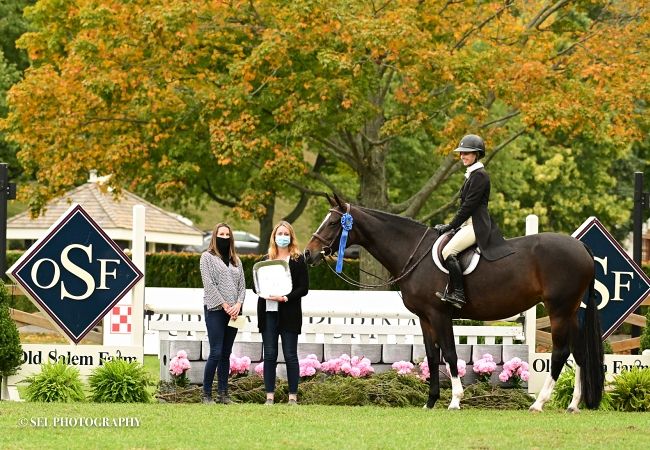 North Salem, NY — Sept. 27, 2020 —The final day of the Old Salem Fall Series attracted the area’s top horse and rider combinations with the competition focused entirely on the hunters with featured derby events. All three hunter derbies, the $5,000 Old Salem Farm Hunter Derby, the $1,000 Child/Adult Hunter Derby and the $1,500 USHJA Pony Hunter Derby, gave hunter riders their opportunity to take a turn on the farm’s iconic grass Grand Prix Field. The $5,000 Old Salem Farm Hunter Derby kicked off competition on the field with young professional Hannah Isop rising to the top. Amateur Julia Weiss took the second victory of the day aboard Don Pedro in the $1,000 Child/Adult derby and Eva Mackenzie led the victory gallop aboard Farmore State Of The Art in the $1,500 USHJA Pony Hunter Derby.

Nancy Wallis designed an elaborate hunt-and-go formatted course for the first derby track with the handy round starting at fence eight after the riders crossed through a chute of posts, signaling the beginning of the short track.

“For today’s course, I focused on spreading out the time between the fences and just encouraging a nice flow because the terrain of the field presents enough of a challenge to many horses,” explained Wallis. “I didn’t really put together many set distances between fences but rather just wanted the riders to produce a nice hunter round where they did not have to make too many adjustments or overuse their reins.”

Wallis said that the walk element between the posts gives the horses and riders a minute to take a breath and regroup, while giving judges the opportunity to call the score in for the first round before the handy begins. Three dozen combinations contested the track and received a combined score from judges Timmy Keys and Jenny Fisher. Hannah Isop ended the classic round with a score of 85.00 and then improved her performance by earning an 86.00 for her handy round. She finished with the win with a score of 171.00 points.

“Today was absolutely beautiful for the hunters,” Isop said. “This is a stunning venue and it is five minutes down the road from our farm so it’s a fun local show to be at with our peers. The footing is great and it is always run well.”

The Pawling, New York, resident added that walking through the posts to begin the start of the handy phase was unique and beneficial to both riders and judges.

“I enjoyed the hunt-and-go format because it was something different. It was a great idea, as was the walk through the post,” she said. “When I have done this format in the past I know the judges have sometimes struggled to get their scores in in time for the handy so it was definitely smart.”

While Isop’s partnership with the 10-year-old KWPN mare Zalandra (Zento x Galandra Z), owned by Harry Littler, is new, she sees a bright hunter future for her.

“I only showed this horse once before and she has just recently started her hunter career, but she was fabulous today,” she said. “She was incredibly handy in the second phase and very brave throughout.” 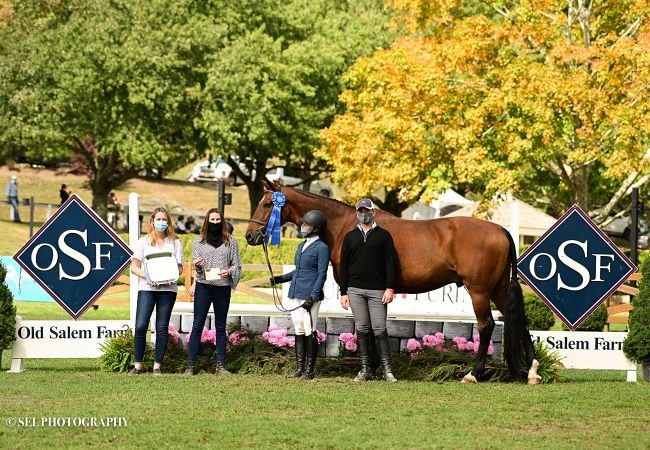 The New York, New York, resident earned duplicate scores of 85.00 points in both the classic and handy portions to top the leaderboard with a final score of 170.00. 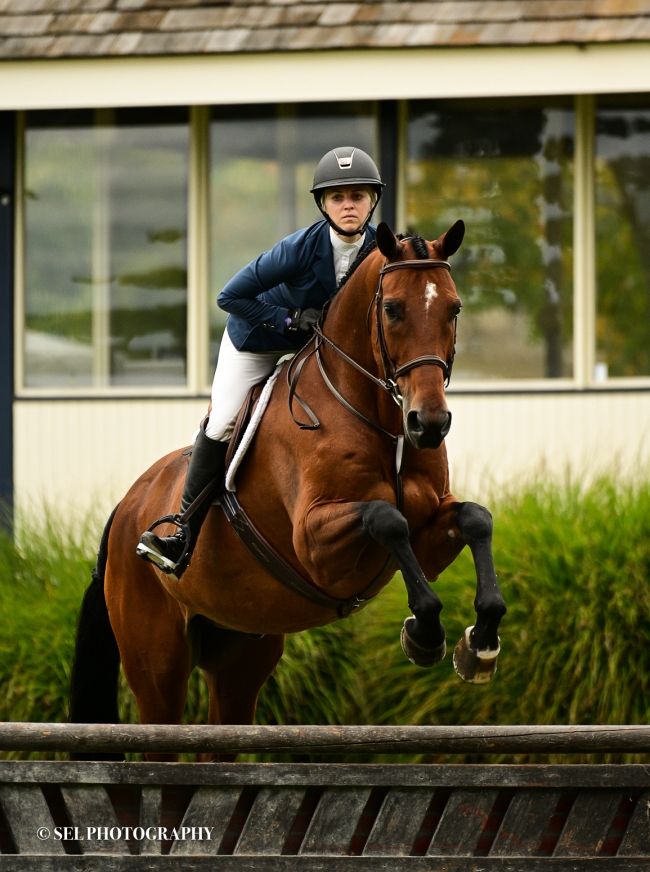 While Don Pedro is a veteran hunter mount, his partnership with Weiss was almost non-existent before the day’s derby.

“This horse is truly phenomenal, I showed him for the very first time yesterday in the Adult Amateur Hunters and he was champion,” Weiss said. “He really can do no wrong, and I think today our handy round stood out because he is, above all, steady and consistent.”

As a local resident, Weiss says she enjoys taking a break from the city and work to come and support a local show facility. 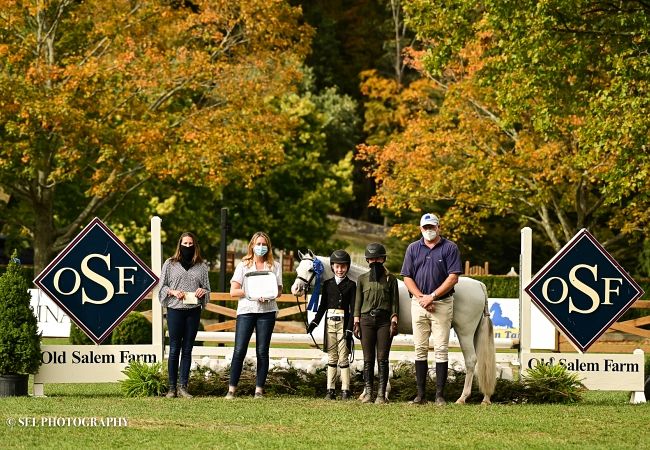 Eva Mackenzie and Farmore State Of The Art Rise to the Top of $1,500 USHJA Pony Hunter Derby

In the final derby of the day, the $1,500 USHJA Pony Hunter Derby, diminutive hunter athletes took their turn across the terrain of the Grand Prix Field. With a total of 19 entries, course designer Wallis opted for a typical hunter format with all riders performing in the classic round and the top 12 combinations returning to show their handiness.

Eva Mackenzie, a young junior from Darien, Connecticut, aboard Farmore State Of The Art earned scores replicating Hannah Isop’s in the $5,000 Old Salem Farm Hunter Derby. She and Nicole White’s 14-year-old Welsh Pony gelding (Eyarth Grenadier x Telynau Ballerina B) left the classic round with a score of 86.00 and earned just one point less in their handy for a total of 171.00 points. 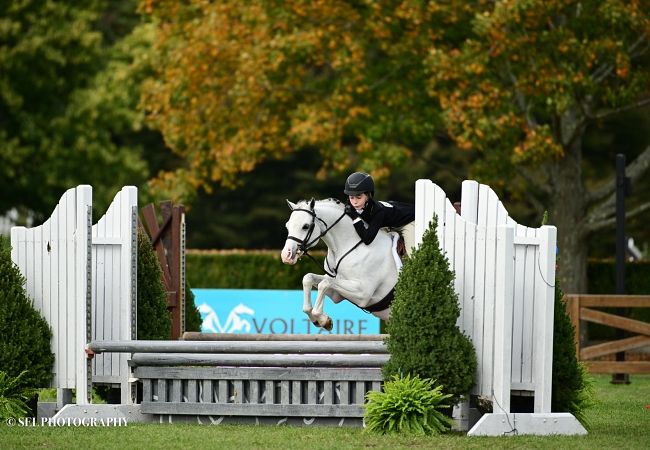 Eva Mackenzie with Farmore State Of The Art. Photo by SEL Photography

“This derby was so fun for me, I loved the set up of the course,” Mackenzie said. “My pony just really does love his derbies and I think his enthusiasm showed today.”

The pair have been at Old Salem Farm since the start of the series and competed at top venues across the country during the summer such as the Princeton Summer Classic and the Saratoga Special.

Old Salem Farm is grateful to the Fall Series sponsors, all the competitors, professionals, vendors, support crew and staff that made the three-week competition a success.