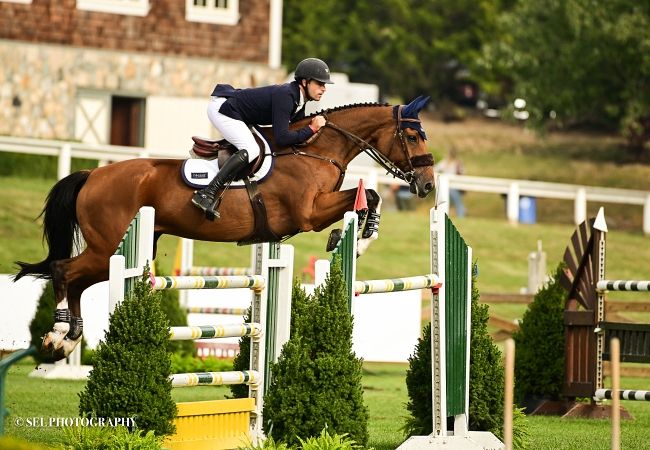 Top riders such as Adrienne Sternlicht, Rodrigo Pessoa, Lillie Keenan and McLain Ward lined up to take their shot at Nancy Wallis’ first-round track in the $10,000 Old Salem Farm Jumper Classic, but less than half of the original field produced a fault-free effort to advance to the second round. Much like his mentor McLain Ward, whom he works for at Castle Hill Farm, Bilbao was in it to win as he piloted Helios through the jump-off timers in 28.311 seconds with all fences left standing.

“Helios was ridden previously by Adrienne Sternlicht and he is a horse we have already jumped in some very big classes, so today was pretty easy for him,” Bilbao said. “I had a plan set up with my trainer and we were able to stick to that plan.”

Although a resident of New York at Castle Hill Farm, Bilbao added that Week I of the Fall Series was his first time at Old Salem Farm.

“It’s a little bit of a difficult ring if you aren’t familiar with it,” he said. “But now we have gotten used to it so it is going much better.”

No stranger to the podium, Ireland’s Jordan Coyle nabbed the second place spot aboard Celtic Park LLC’s 8-year-old Oldenburg gelding Centriko Volo (Centadel x Dolcetta) after finishing double clean and just narrowly falling behind Bilbao with a time of 28.858 seconds. Coyle and another mount Picador won both the $25,000 Grand Prix of Old Salem and the $75,000 Old Salem Farm Grand Prix. Both grand prix events were presented by The Kincade Group.

Delaney Flynn of Park City, Utah, earned her place in the top three falling only two seconds behind but jumping double-clean. She and Grace Jacobsen’s Milan IV, a 15-year-old Holsteiner gelding (Lasino x Oki Doki), stopped the clock at 30.100 seconds to land in the final top three.

New York City resident Aerin Genatt and Quintessential had a strong start to the Junior Hunter 3’6” division as the pair took the top honors in both over-fences rounds of the day. Genatt and her own 9-year-old Hanoverian gelding bested eight other junior combinations in both classes and will be strong contestants for the tricolor championship ribbon, to be awarded on the conclusion of the division Sunday.

“I only partnered with Quintessential in the spring so this is our first time showing in the Junior Hunter 3’6” division together at Old Salem,” Genatt said. “However, I have been coming here for the past six years because it is by far one of my favorite shows to attend.” 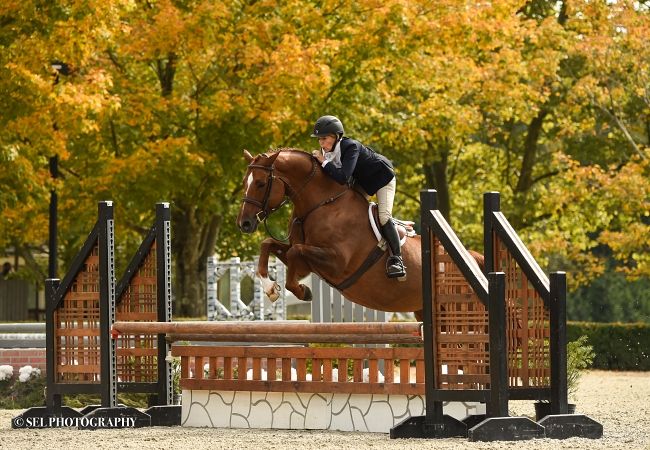 Shelly Ferrall and In Joy. Photo by SEL Photography

Adult amateur riders also showed up to perform for the day and Shelly Ferrall of North Salem, New York accepted the champion ribbon with In Joy (Zidane x Capita) in the Adult Amateur Hunter 50 and Over division. The duo won two of their three classes to take the title.

“I came off of another horse a while back so when I got her I was very nervous and timid,” Ferrall explained about the start of her partnership with the 11-year-old chestnut Belgian Warmblood mare. “This is only about the fifth time I’ve shown her but she has given me all my confidence back.”

“It feels great to be back at this show amongst a good group of exhibitors again, and it feels perfectly safe which is a credit to the excellent job they’ve done here at Old Salem,” she added.