Alexandra Hird and Adare Ya To Put on the Speed to Win $1,000 1.30m Open Jumper Stake, Presented by Voltaire Design 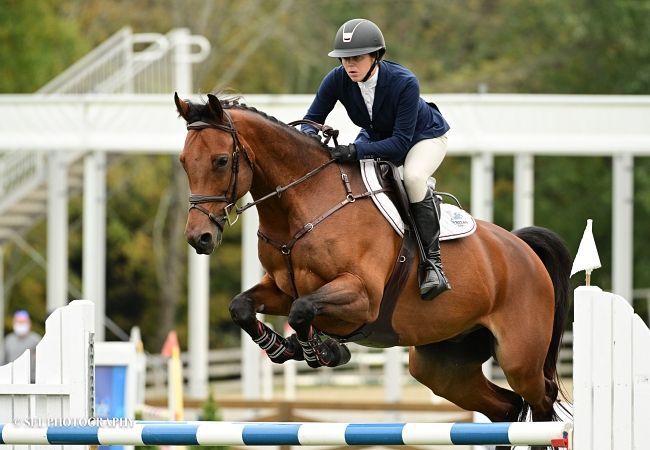 Alexandra Hird and Adare Ya To. Photo by SEL Photography

A total of 39 combinations lined up to contest Nancy Wallis’ $1,000 1.30m Open Jumper track, with well-known names such as McLain Ward and Peter Lutz making their series debut alongside those who have competed over the last two weeks. In an extremely competitive class, 18 entries produced double-clear rounds, but none could catch Hird. She and the Veritas Farms LLC’s 10-year-old Irish Sport Horse entry Adare Ya To (Chacoa x Cool Calm Scarlett) flew through the timers in 28.057 seconds, topping the second-place finisher by almost a full second. 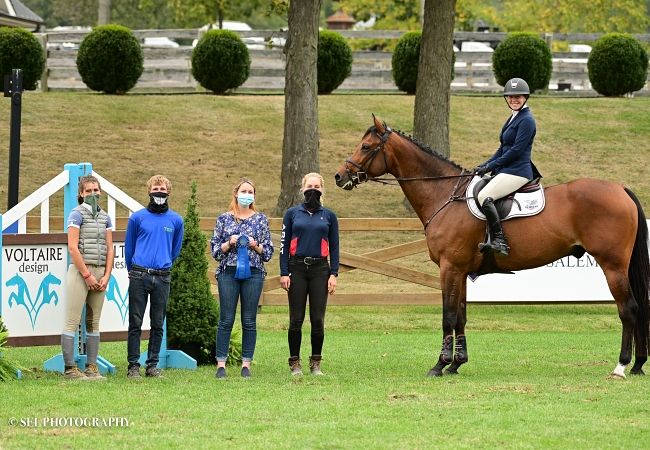 Veritas Farm team Stephanie Presuto, Juliet Matinho, and Travis Bikowitz, with Amanda Terbrusch and Alexandra Hird. Not pictured but an integral part of the team is August Torsilieri. Photo by SEL Photography

“We had a very nice school in the first round, and then I really put the gas pedal on for the jump-off,” Hird explained. “I got moving quite forward at the beginning of the course, and there were a couple of tricky elements but overall, it felt great.”

“I really enjoy riding on the grass here at Old Salem,” she continued. “We competed in the grand prix during the first week of the series and that was one of the biggest tracks we have jumped, so we just took a small step back today and I think the round was an excellent confidence-builder for both of us.”

Hird plans to finish out the week with the $10,000 Old Salem Farm Classic on Saturday before heading to Tryon. 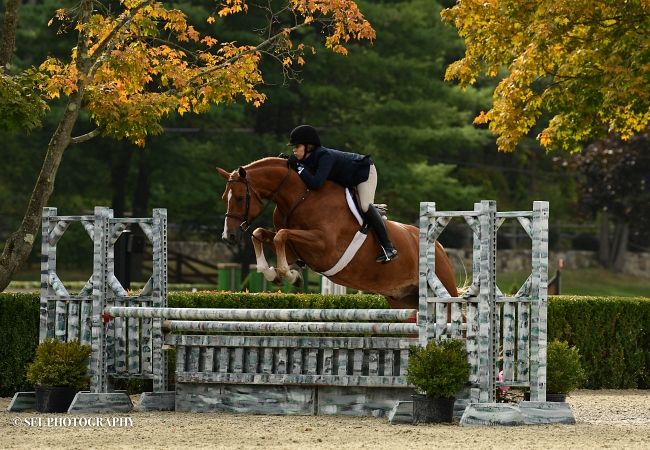 While the Performance Hunter division will not declare a champion until its completion on Friday, Wellington, Florida-based hunter professional Holly Orlando made a strong claim for the position after bringing home the blue on separate mounts in both of the first day’s over-fences classes. She piloted James Anderson’s 8-year-old Warmblood gelding Fable (Coupe De Alb x Queen T) to a first and fourth result. Orlando duplicated those efforts by scoring fourth and first with Privet Farm LLC’s 9-year-old Dutch Warmblood gelding Park City.

“Fable is very straightforward,” Orlando commented. “He has a big stride and a lot of jump so he just cruised right around.”

She added, “Park City is a very similar ride and just a beautiful jumper. Today was the start of their first time showing in a while since we were mostly shut down over the summer so I just wanted to get us all reacclimated.”

Orlando and fellow professional Jenny Dunion make up Evermore Inc. This year they spent their spring through fall based out of Bedford, New York.

Competition on Friday will determine the championship of the combined Performance Hunter 3’3” and 3’6” division and will feature another $1,000 1.30m Open Jumper Stake, presented by Voltaire Design leading up to the $10,000 Old Salem Farm Jumper Classic on Saturday.