Jordan Coyle and Picador Take Second Victory in less than a week in $25,000 Grand Prix of North Salem, presented by The Kincade Group 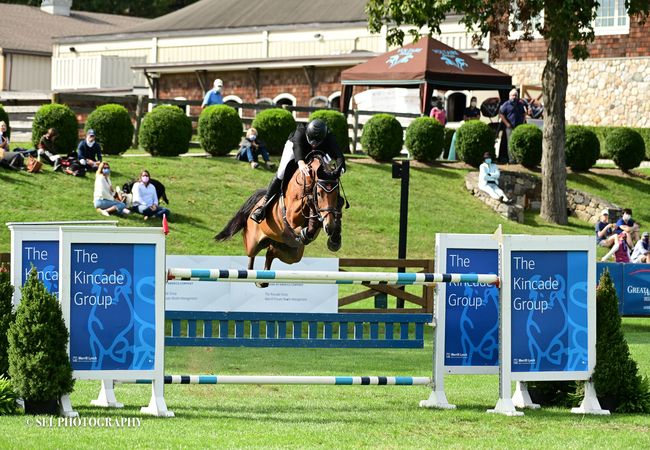 Jordan Coyle and Picador soaring to victory in the $25,000 Grand Prix of North Salem, presented by The Kincade Group. Photo by SEL Photography.

North Salem, NY — Sept. 11, 2020 — Old Salem Farm Fall Series continued Friday with the first of two featured show jumping events of Week I. In the $25,000 Grand Prix of North Salem, presented by The Kincade Group, Ireland’s Jordan Coyle topped a field of 43 horse-and-rider combinations. Across the showgrounds in the hunter arena,  Taylor Bodson of Greenwich, Connecticut. earned the championship of the Adult Amateur Hunters 18-35 with her own Campari.

Of the original opening field in the $25,000 Grand Prix of North Salem, 12 competitor teams returned to the field for the jump-off portion of Paul Jewell’s track. Karen Polle (JPN) and Jet Run had a round matching the 10-year-old Oldenburg’s name with a blazing time of 31.805 but one unlucky rail kept the pair from the final lineup. Seven of the 12 to return for the jump-off produced a second clear round, but it was Jordan Coyle and Elan Farm’s 13-year-old Anglo-European gelding, Picador (Lupicor x Kind Of Magic), that left every rail standing at the fastest time of 32.211 seconds.

“My only edge in the field today was this horse,” Coyle said. “The course rode very well and mostly as I had planned it.”

He added, “I think the only issue we had was that I made him try a bit too hard for the double so the second to last jump we shouldn’t have had to try as hard as we did, but he loves to jump and he made it work.”

Coyle and Picador’s win comes less than a week after the duo captured the victory in the $75,000 SmartPak Grand Prix of Saugerties.

“He’s a truly fantastic horse,” said Coyle of Picador. “Ninety percent of the classes I’ve jumped him in he wins, and the other ten percent I maybe push him too fast or he makes a mistake but that is very unusual.” 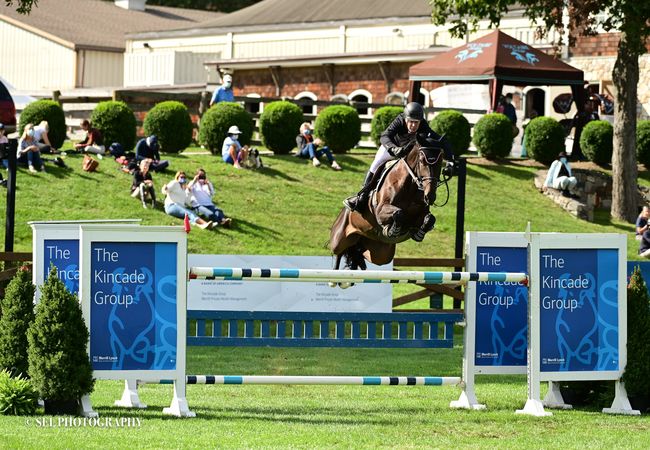 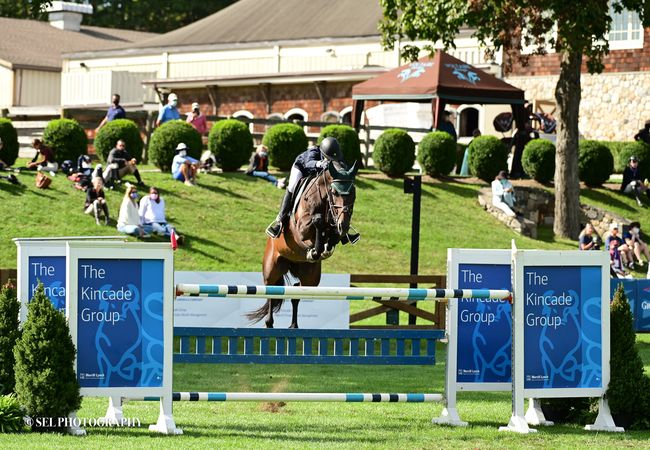 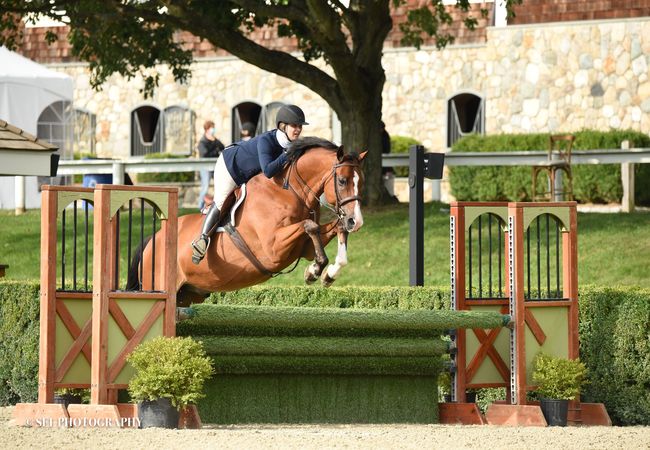 Taylor Bodson and Campari cruising to the championship of the Adult Hunters 18-35. Photo by SEL Photography

Taylor Bodson and her long-time partner, the 12-year-old Warmblood gelding, Campari (Cabardino x Rusalka W), seemed to not miss a beat getting back in the show ring as they pinned first in both over-fences portions and fourth in a competitive under-saddle. Bodson explained that this was only her second show after recently giving birth.

“It felt great to be back in the show ring after almost a full year off,” she said. “It was wonderful especially to be back at Old Salem. I’ve been showing here since I was a junior so it was fun to be back here as an adult.”

Bodson says she hopes to continue to spend more time in the saddle and the show ring while balancing motherhood.

“After having a baby and getting back in the show ring, I have so much respect for all of my fellow mothers because it is no easy feat,” she added.

The young jumpers in the 5 and 6-year-old category were also a highlight of the day in the $1,000 5 and 6-Year-Old Young Jumper Classic where Suzanne Mancheski bested the field. Mancheski piloted her own 6-year-old Dutch Warmblood gelding, Jazou SRR (Arezzo VDL x Mona Lisa-S), to a clean and quick round of 70.852 seconds. 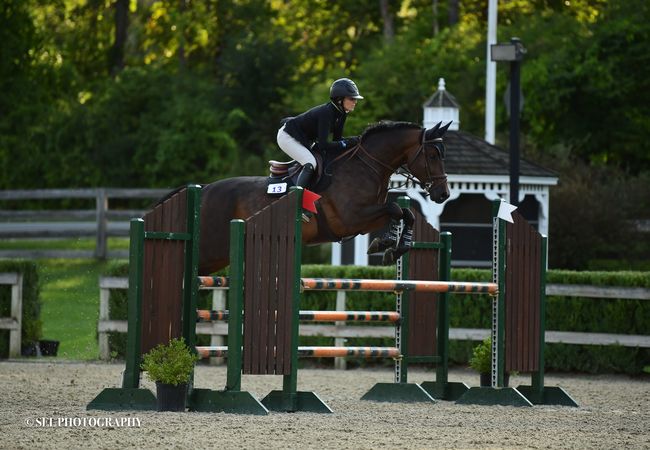 Meet Sarah Maslin Nir, Author of “Horse Crazy:The Story of a Woman and a World in Love with an Animal,” Sunday Before the $75,000 Grand Prix of Old Salem, Presented by The Kincade Group 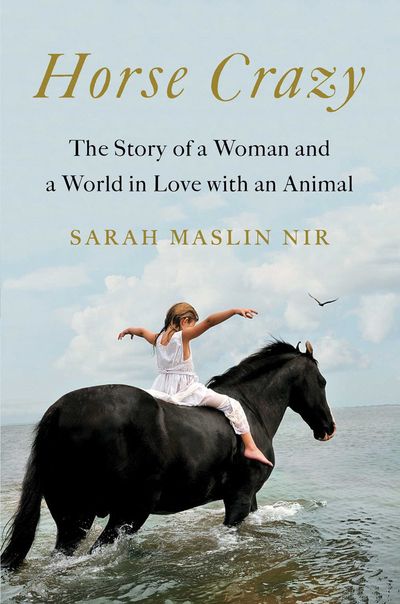 Sarah Maslin Nir plans to make an appearance Sunday, Sept. 13 for a signing of her bestselling book, “Horse Crazy: The Story of a Woman and a World in Love with an Animal.”  In the tradition of works by such authors as Susan Orlean and Mary Roach, New York Times reporter and Pulitzer Prize finalist Nir explores why so many people—including herself—are obsessed with horses.

Here’s some praise for “Horse Crazy:”

“A funny, fascinating and ultimately moving love letter to one of the world’s most beloved animals.”—USA Today

“Sarah Maslin Nir is one of the sharpest, most compassionate and talented writers out there today. Whether on the pages of the Times or here in this book, you will enjoy consuming her every word.”—Alec Baldwin

“Lyrical, lovely, and thoroughly engaging, Horse Crazy is that rare book that looks inward and outward. It harnesses Nir’s smart reporting about the world of equine devotion with a reflection on her lifelong love of horses, and the result is wonderful.”—Susan Orlean, New York Times bestselling author of The Library Book

Keep up to date with all the latest at oldsalemfarm.net  or on the Old Salem Farm social media pages.