August 3, 2019 – Callie Jones made a triumphant return to the Adequan® FEI North American Youth Championships (NAYC), presented by Gotham North, as she added a second consecutive gold medal in the United States Dressage Federation (USDF) North American Young Rider Individual Championship to her record on August 3 with a score of 72.64%. 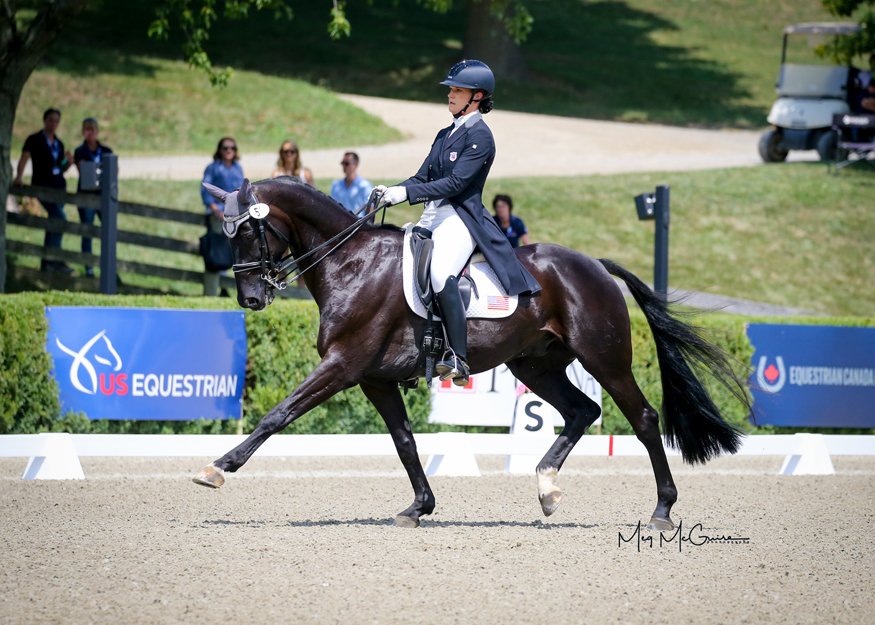 Vanessa Creech-Terauds of Canada claimed the silver medal, while Kayla Kadlubek of USDF Region 1 took the bronze. Both Jones and Kadlubek are members of the Discover Dressage™ USEF/USDF Emerging Athlete Program. 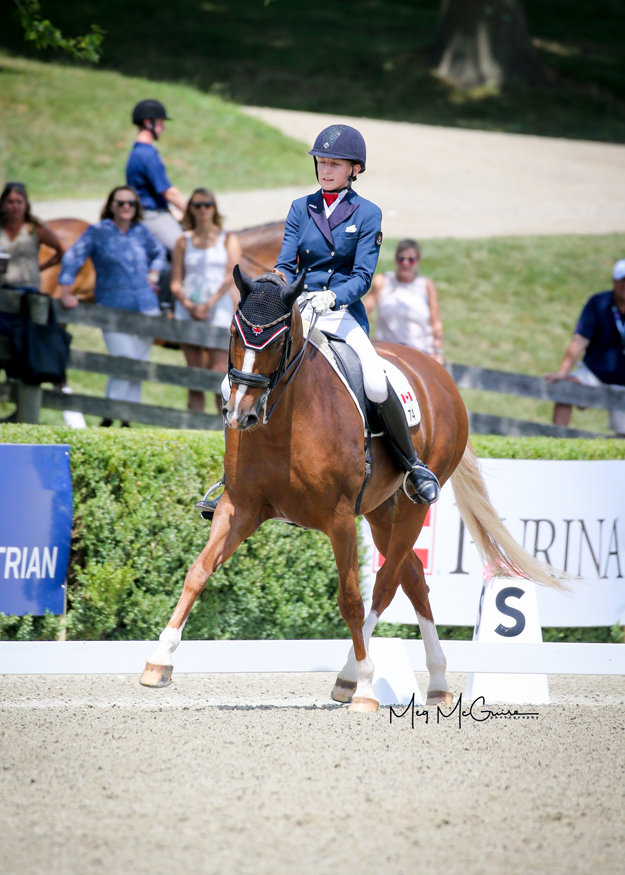 ‘Jones, 21 and from Henderson, Ky. (Region 2), rode her own Don Philippo, an 11-year-old Hanoverian gelding, to the gold. “I honestly didn’t expect it. It’s really special,” said Jones. “My horse was so focused today and really gave me his all. In the trot work, he was up in the carriage and really expressive. I think my canter pirouettes were better than what we’ve been doing, so I think that helped with the score overall. He was just with me the entire time, so I’m really happy.”

Don Philippo had also been her mount for the Young Rider Individual gold and Freestyle bronze at the 2018 NAYC and Young Rider team silver with Region 2 at the 2017 NAYC. The pair made their NAYC debut in 2016 in the Junior division. “We clicked last year, but we just keep growing as a team. He’s so special,” she said.

Jones admitted that she felt a bit of pressure returning to NAYC as the defending gold medalist, but it didn’t affect her test. “At first I was getting a bit nervous, but as time went on, I thought to myself, ‘I just have to go out there and ride my ride.’ Whatever you and your horse can do, you have to lay it out there. Today, I wasn’t as nervous, but I was feeling some pressure,” Jones said.

As this is her last year of NAYC eligibility, Jones plans to move up to the Under 25 Grand Prix classes with Don Philippo.

Creech-Terauds, 19, from Caistor Centre, Ontario, couldn’t have been happier with her silver-medal performance with Diane Creech and Louise Leatherdale’s Fleur de Lis, a 10-year-old mare. “I’m absolutely ecstatic. It’s the best feeling in the entire world. After my ride, I was literally shaking with joy,” she said. 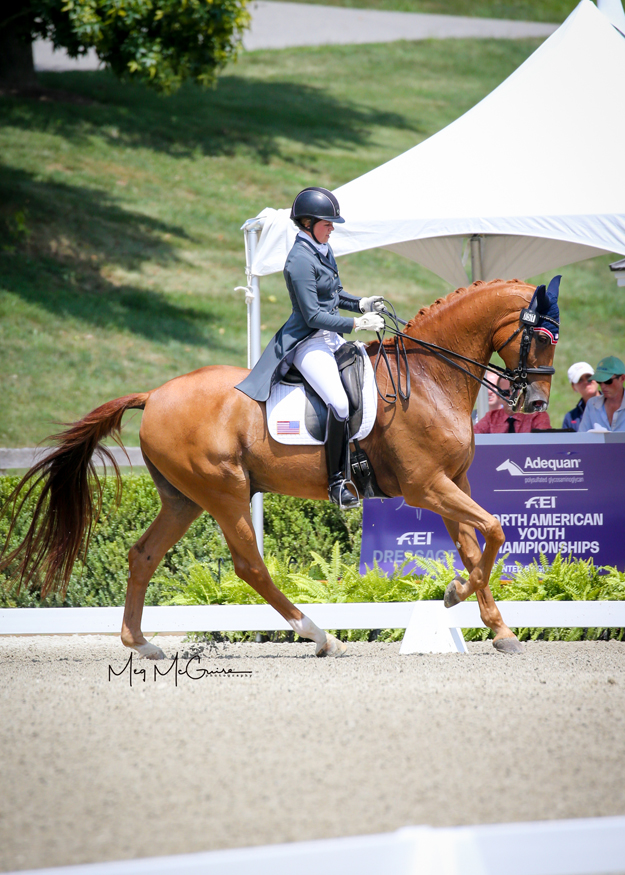 The score of 71.02% put Creech-Terauds into the silver-medal spot. “I was really happy with her tempis and her extensions. They felt super,” she said. “We both really went for it, and I feel like our canter pirouettes have become so solid lately. We’ve really figured that out. Everything feels so solid right now; she knows her job and loves her job.” The pair had helped the Ontario/Quebec team earn silver in the Young Rider team competition on August 1 as well.

Creech-Terauds was riding in her fifth NAYC; she previously earned silver in the Junior Individual test and gold in the Junior Freestyle at the 2016 NAYC riding Fleur de Lis. “It’s amazing to me to come here and get the silver medal in the Young Rider division as well,” said Creech-Terauds. “We’ve made so much progress together. I can’t thank her owner and my sponsor, Louise Leatherdale, enough for partnering me with this mare. It’s been the best experience of my life. She’s my favorite horse in the whole world.”

Kadlubek, 19, of Fairfax Station, Va., also experienced a bit of déjá vu, as she and Perfect Step, an 18-year-old Hanoverian gelding that she leases from the Dressage4Kids program, also took bronze in the Individual test at the 2018 NAYC. Earlier in the week, they helped the Region 1 team earn gold.

“My horse is just so solid. He knows his job so well,” said Kadubek. “I can always rely on him to go out there and do what I want him to do. It’s nice to be able to focus on what’s going on in the test with him. He’s just so steady and solid.” 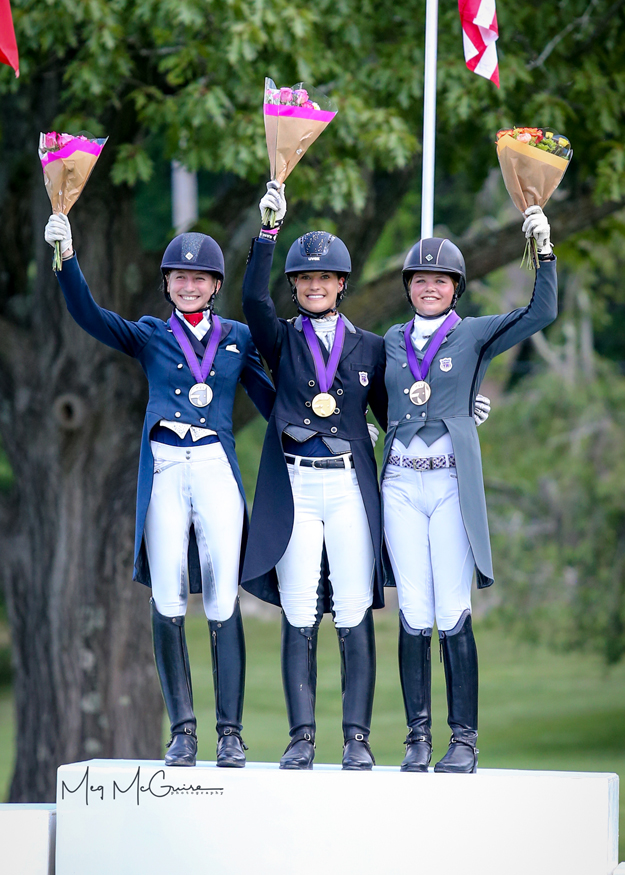 Kadlubek and Perfect Step scored 70.35% for the bronze. “He just tried so hard for me today. He was a little more tired than in the team test, so I’m really proud of how he gave me everything. His three-tempis were nice and solid and I was happy with everything,” she said.

Jones and Kadlubek have both been part of the Discover Dressage™ USEF/USDF Emerging Athlete Program, and they rode on a Nations Cup team together during a summer European tour in June for riders from the program. The U.S. team placed fourth at the Future Champions Hagen CDIO-Y in Germany in June after showing at the Compiègne CDIY in France as individuals.

“The experience in Europe is unbelievably positive and effective,” said U.S. Dressage Youth Coach George Williams. “They came back stronger and more confident riders. This is the second year Callie has [competed in] the Young Rider Tour, and it was a very good trip for her. She came back to the NAYC [and performed better].

“I see this as a huge confidence builder. For Kayla, [the European Young Rider Tour] was her first exposure to [European competition]. It’s an eye opener, but again, it built her confidence. It is so good for them to compete against their peers from other countries and be in another environment. It also drives home the point for them that they are representing the United States, and they return with [a larger sense] of pride.”

Mackenzie Carreras (16, Chandler, Ariz., USHJA Zone 8) and Contessa K jumped double clear to win the USHJA Junior and Young Riders Show Jumping Farewell Competition on Saturday. She and her 13-year-old Rheinlander Warmblood mare advanced to a two-combination jump-off where they won in 44.72 seconds.

“She felt really good. I was very happy with today. We jumped two clear rounds. I was much happier than the first day as we came in a little nervous. We didn’t have the best day, but we ended on a good note,” said Carreras. “This is my first time [at NAYC]. It’s really good experience. It was nice to be on a team. I did the [USHJA] Zone Jumper [Team] Championships, which is similar, but this is way more intense. It’s really fun, and I liked it a lot. I’m definitely going to come back.”

Check out the live stream of the NAYC on USEF Network continuing Sunday, August 4, with the USDF North American Young Riders and Junior Dressage Freestyle Championships at 8:00 a.m. EST and the children’s, junior, and young rider Individual Finals of the North American Youth Show Jumping Championships, presented by the USHJA, at 8:30 a.m. EST.

Stay up to date on the Adequan®/FEI North American Youth Championships presented by Gotham North by following FEI NAYC on Facebook and Twitter. Use #FEINAYC.