August 2, 2019 – It all came down to the last round, but the Canadian team clinched victory in the USHJA North American Young Rider Show Jumping Team Championship at the Adequan® FEI North American Youth Championships, presented by Gotham North, at Old Salem Farm in North Salem, NY on August 2.

As the last to jump for the Canadian Young Rider team, Sam Walker, 17, from Caledon, Ontario, had the weight of expectation on his shoulders as he cantered MarBill Hill Farm’s Coralissa, a nine-year-old Holsteiner mare, around the Marina Azevedo-designed course. A clean round would earn gold; a rail would mean silver. It had been since 2003 that a Canadian Young Rider team had won gold. 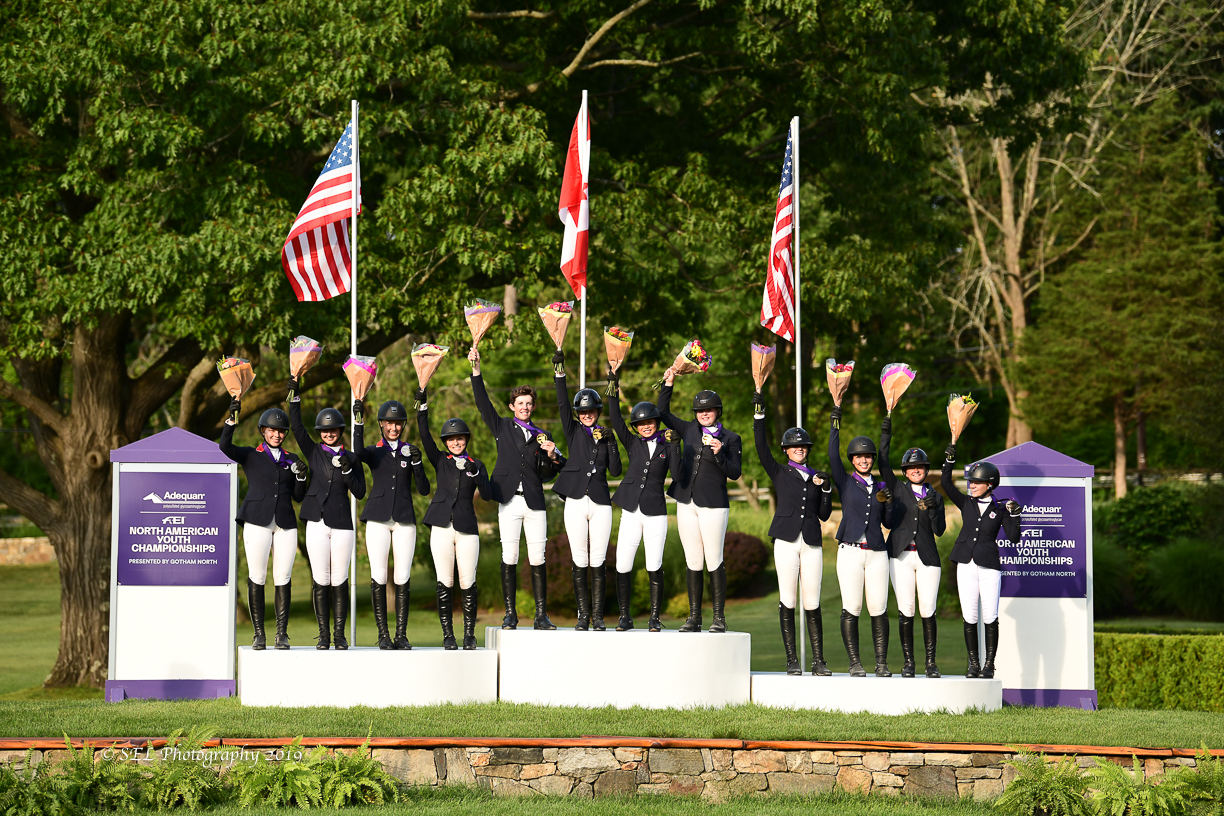 Walker, who is also leading the Young Rider individual standings, turned in a clear round to secure gold for Canada with a 19.25-fault team total. “We had an unfortunate time fault in the first round that stopped us from having a true double-clear, but I’m very happy with her,” said Walker. “I’m truly grateful to have the ride on her, as I don’t own her myself. I thought she jumped both rounds exceptionally today. The first round, I had a little issue with the time, but that was all on me. She jumped the water great in both rounds and jumped the triple amazing both rounds. She really handled herself with a lot of maturity for such a young horse.”

Walker had ridden on the 2018 Junior NAYC team for Canada and helped them earn bronze. “Winning the gold medal means a lot to me because we are from a different country. We all traveled down here and gave it our best shot,” he said. “For Canada, I think it’s a big accomplishment. I just want to thank the horse show, the course designers, the stewards, sponsors, and everybody who puts this show on. And thanks for everyone from Canada for their support.”

Mackenzie Wray’s clear second round after a four-fault first round on Makim Holdings Inc.’s Jewel LVP, a 10-year-old Belgian Warmblood mare, also helped secure the gold. Wray, 20, and from Loretto, Ontario, was showing in her first NAYC. “I thought she handled the courses amazingly,” she said. “The rail in the first class was all my fault. I’ve jumped in some big classes with her this past year, and she’s never let me down. The second course, I thought she might be a bit tired, but she was the exact same horse. I’m so grateful to be able to ride such an amazing horse.”

Dannie Murphy, 19, of Charlottetown, Prince Edward Island, posted scores of one time fault and four faults over the two rounds with Martie Murphy’s Isabeau de Laubry, an 11-year-old Belgian Warmblood mare she’s been riding since March. “Our relationship is new. She jumped both rounds amazing. Those were both rider error,” she said. “This was my first time at NAYC, and it was a lot of fun. I’d like to thank [Canadian Chef d’Equipe Dayton Gorsline], who has been amazing.”

Samantha Starratt, 20, from Calgary, Alberta, had a solid day on Day 1 of the competition with Tonia Anderson’s Akolito, an 11-year-old Westfalian gelding, but collected 13 and 16 faults over the two rounds of day two. “Today was a little bit challenging for [my horse and I], but yesterday was good,” she said. “We all have bad days, and that’s why we have great teammates to share these moments with. I’m so thankful for the great team we had here. They made this experience so much fun.”

The USHJA Zone 10 team of Natalie Dean, 20, of Palo Alto, Calif., riding Marigold Sporhorses LLC and her own Don’s Diamant, an 11-year-old KWPN stallion; Emma Catherine Reichow, 17, from Menlo Park, Calif., on her own Forever Alve, a nine-year-old KWPN mare; Cate Tomlinson, 18, of Palo Alto, Calif., riding her own Hawai van Paemel, a 12-year-old Belgian Warmblood mare; and Alessandra Volpi, 19, of Woodside, Calif., and her own Foster, an 11-year-old Hanoverian gelding, earned the silver with 22.27 faults.

An ecstatic team from Mexico celebrated loudly during the victory gallop after they collected their gold medals for topping the USHJA North American Junior Rider Show Jumping Team Championship. They finished on a score of 20.62 for the gold medal, while the United States Zone 2 team claimed silver and the U.S. Zone 5 team took bronze. 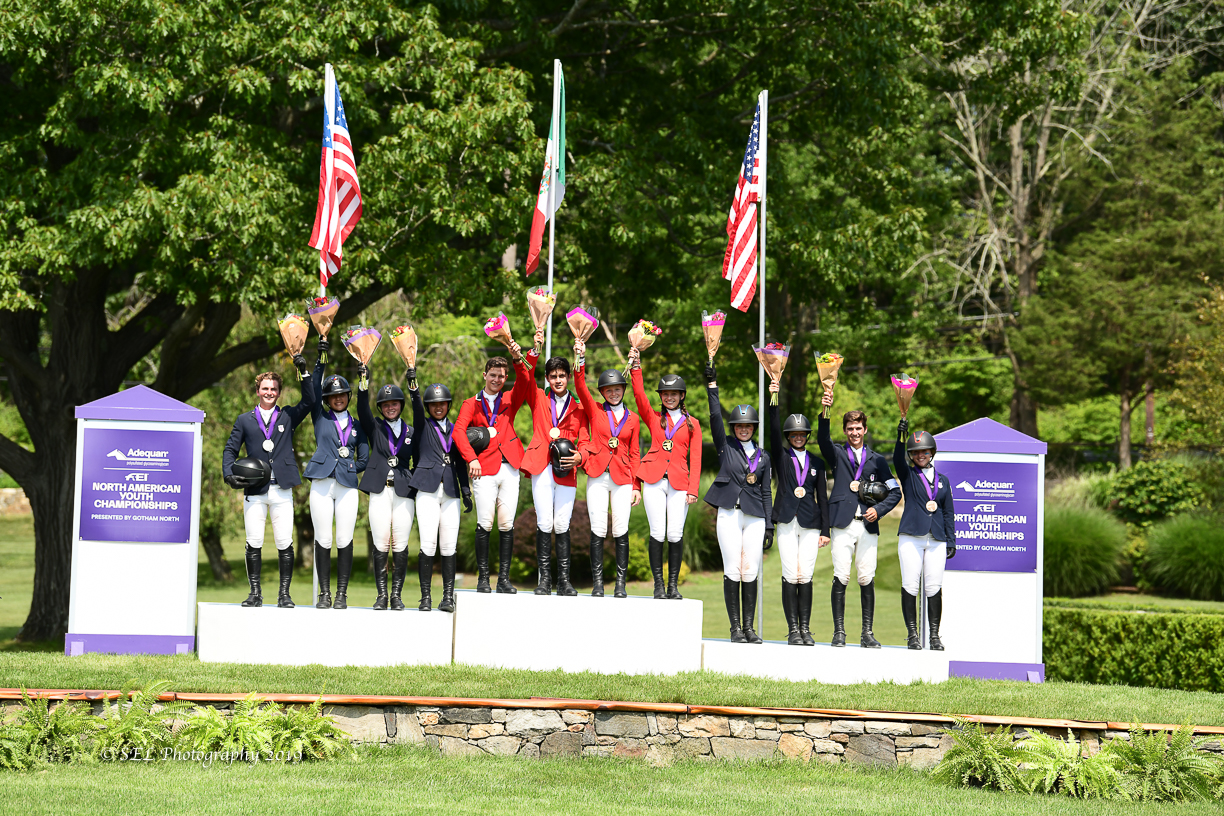 “We’ve been competing together since we were children, so this experience has been like a dream come true. To win with your friends—what a way to win!” said Carlos Rodolfo Molina Gordillo, 17, who rode C Dallas LZ, Ecurie Benjamin Robert’s 11-year-old Zangersheide mare, to two clean rounds for the Mexican team.

“I’m really happy and proud because my mare gave me everything,” said Molina, who was competing at his third NAYC but celebrating his first medal.

This was Denis’ third NAYC appearance; she helped the Mexican Junior team claim silver in 2018 and the Children’s team take bronze in 2017. “I’m really happy with my horse. He jumped well and I’m grateful to all the people who helped us achieve this,” she said. “It’s nice to win something and be able to share with all your friends.”

Mauricio Neumann Priess, 17, was competing in his first NAYC and posted two scores of four faults for Mexico aboard Ralf Neumann’s Blanca, a 13-year-old KWPN mare. “It’s my first time here, and to win my first time is a very beautiful feeling. Viva Mexico!” he said. “I’ve been riding my mare for three years now. She’s simply done everything for me. This was the best I could hope for. I enjoyed being in the company of my friends, and I got to know new people and see new places. [Old Salem Farm] is an incredible place, like a Disneyland for horses!”

Also jumping to two four-fault rounds was Martina Franco Stephan, 17, who rode Christian Glanemann’s Vivaldi Hille, a 10-year-old Selle Francais stallion. Franco had been on the same silver-medal Junior team in 2018 as Denis. This was her third NAYC competition.

“I’m really grateful to my team and also to my horse, because even though I was not perfect, he did a great job and I’m happy with him,” she said. “I love being with my teammates and being here. It’s been amazing.”

The U.S. Zone 5 team took bronze with Kathryn Hall, 17, of Versailles, Ky., riding her own All In, an 11-year-old Holsteiner mare; Kyle Perkovich, 18, from Long Grove, Ill., on his own Hit Me van’t Zorgvliet, a 12-year-old Belgian Warmblood; Stefanie Shaw, 18, of Lakeville, Ill., on her own Contessa, a 10-year-old mare; and Graciela Robert, 18, from Concord Township, Ohio, riding Rose Hill Farm’s Fineman, a 16-year-old Swedish Warmblood gelding.

Riders from USHJA Zones 4 and 10 combined forces to claim the gold medal in the USHJA North American Children’s Rider Show Jumping Team Championship, finishing on a total of seven faults for the victory. The USHJA Zone 2 team claimed silver with 28 faults and team Canada took home the bronze with a 40-fault total. 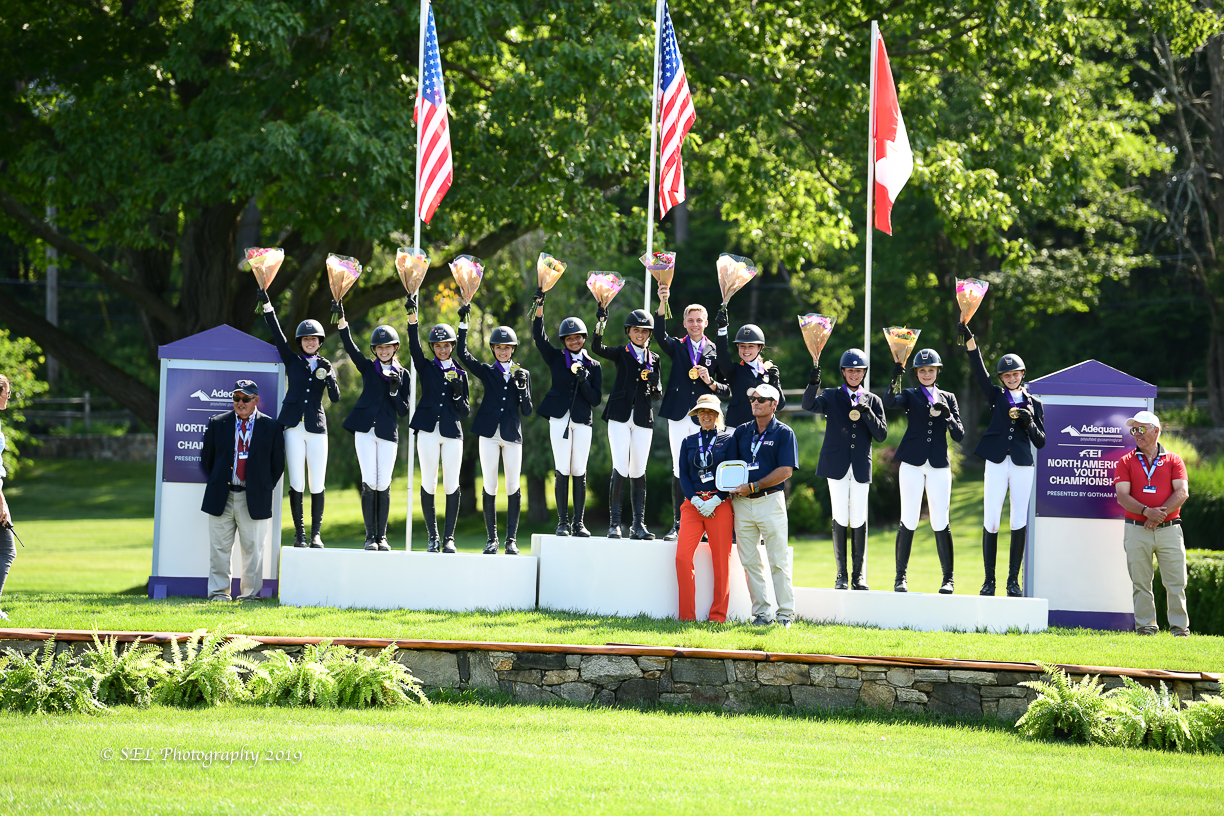 Mia Albelo, 14, from Miami, Fla., led the gold-medal effort with a double-clear performance in the two rounds of team competition on her own Cassandra Dreams, 13-year-old Holsteiner mare. Albelo was the only member of the team with previous NAYC experience, as she’d helped Zone 4 take silver at the 2018 NAYC.

“We had two really smooth rounds,” said Albelo. “She was trying her heart out for me today. I’m so thankful for her. Her barn name is ‘Cassie,’ but we also like to call her ‘Sassy Cassie.’ We’ve gone from the low children’s all the way to the low juniors. She’s brought me so much success. She’s honestly a dream come true. We’ve been to indoors and [NAYC] last year, we’ve done a Nations Cup, and we’ve done Zone Finals. I have no idea what I did without her in my life.”

Chapin Cheska, also coming from Zone 4 to the team, turned in a clean round and a round with a single time fault to help her team to gold. Cheska, 13 and from Wellington, Fla., has only been riding her own Sensation 21, a 14-year-old Hanoverian gelding, since December. “I started in the low children’s with him at [the Winter Equestrian Festival (Fla.)], and by the end of WEF we did our first low junior jumper classic and first Nations Cup together,” said Cheska. “Our biggest problem today was the time allowed, but we fixed that for the second round.”

Two West Coast riders from Zone 10 in their first NAYC appearance joined the Zone 4 pair to make a team. Sahana Ganesan, 14, from Portola Valley, Calif., rode her own Chachas Fire to scores of 1 and 5 faults. “It’s amazing to be able to compete with all the competitors here, even though we’re from different parts of the continent,” Ganesan said. “Everyone here is so nice. It’s such an honor to get to compete with riders of this caliber at our age. It was so easy becoming a team because everyone here is so welcoming. It’s an opportunity to learn how to ride under pressure and to meet lots of new people in the industry.”

William MacLean, 14, traveled from Reno, Nev., for the NAYC with his own Poli Loli L, a 12-year-old Polish Warmblood mare, and turned in scores of 12 and 4 in the two rounds for the team result. “I think we had two really good rounds. The second round was an improvement from the first round, which was really important to me,” said MacLean. “I’ve had Poli Loli for a year. The person who rode her before me was doing the 1.35m on her and she took me from the 1.10m all the way to the 1.30m and 1.35m. Before I had her, I really only did the hunters and the [equitation], so she’s been awesome at bringing me in to the jumper world.”

The riders from opposite coasts didn’t know they’d be joining forces until just before the NAYC competition began, but they enjoyed the opportunity to get to know each other. “I liked that we were from two different parts [of the country] because I’ve never been able to compete with Will and Sahana, and now I have two new friends,” said Albelo. “If I go to California, I have two friends there! We really bonded and it was a super cool experience.”

Check out the live stream of the NAYC on USEF Network continuing on Saturday at 9:00 a.m. EST with the Farewell competitions for Children’s, Juniors, and Young Riders.