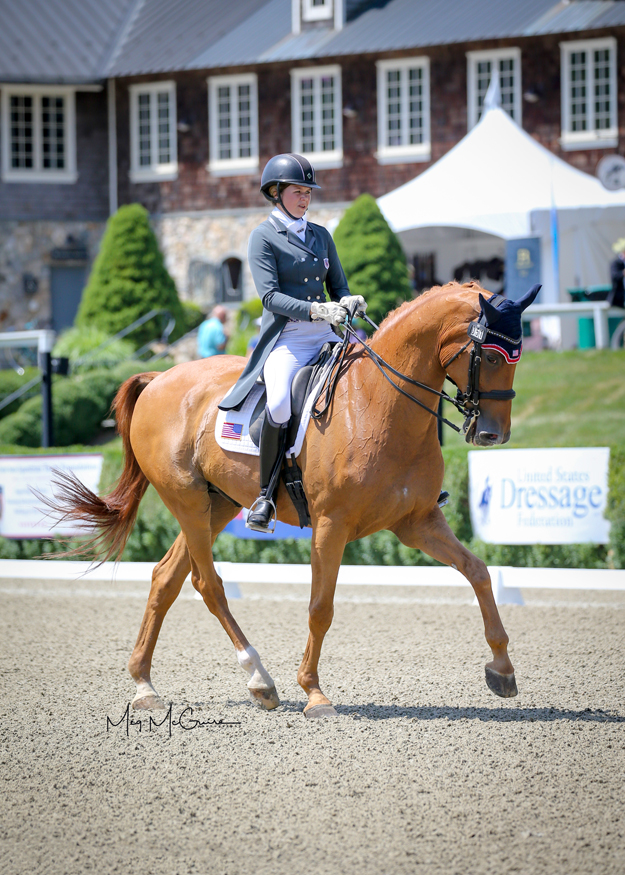 Region 1 team’s total to 205.70 was just fractions of a point higher than the Quebec/Ontario team’s total of 205.67, relegating the Canadian riders to the silver medal. The U.S. Region 3 team claimed bronze with a 205.08 total.

Leading the Region 1 team was Kayla Kadlubek, 19, of Fairfax Station, Va. This was the fourth NAYC appearance for Kadlubek, and she posted the Region 1 team’s high score of 72.64 percent riding her own Perfect Step, an 18-year-old Hanoverian gelding. She’s helped Region 1 teams to bronze medals in 2016 and 2018, and a silver in 2017, but this is her first gold.

“We achieved our personal best, which was absolutely amazing,” said Kadlubek of Perfect Step – the pair are members of the Discover Dressage USEF/USDF Emerging Athlete Program. “I couldn’t be happier. He gets better every single time. It’s such a great confidence booster for me. It was really nice being able to put everything I could out there and earn the gold medal with my team.”

Kadlubek also got the ride on Perfect Step through the Dressage4Kids program after Suzanne Dansby donated him and has competed on the U.S. Dressage European Young Rider Tour. “I’m so thankful to her and Lendon Gray for giving me the opportunity to ride such an amazing horse. I certainly wouldn’t be able to do this without him,” Kadlubek said. 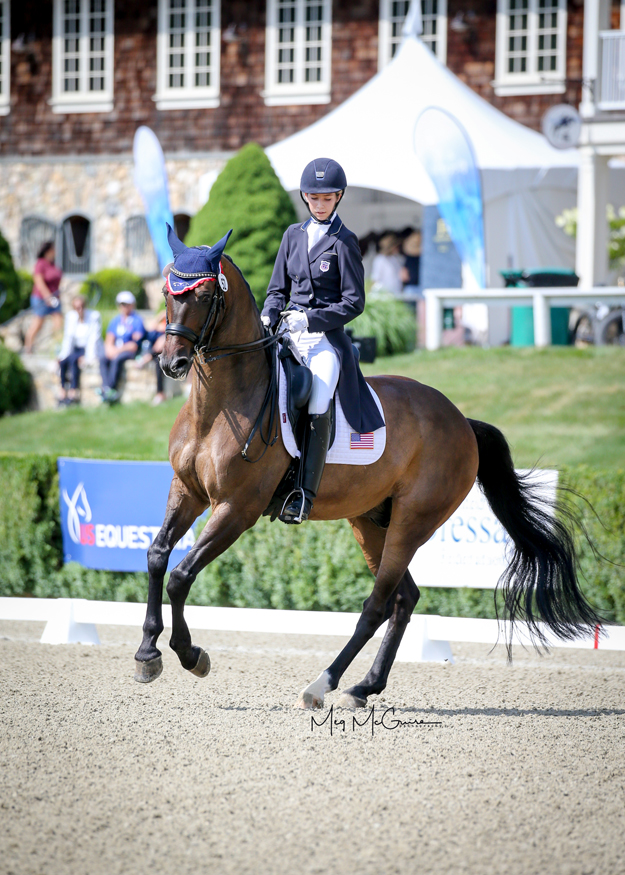 In her first NAYC appearance, Megan Peterson, 19, of Downingtown, Pa., contributed a score of 67.88 percent riding her own Amoretto, a 14-year-old KWPN gelding. She’s owned Amoretto for four years. “I’m just so proud of my horse. It’s been quite a process with him, and I’ve enjoyed every step of it,” Peterson said. “When I got him, we kind of brought him back to the basics, and he’s been doing Prix St. Georges for about two years now. He’s come a long way. I’m happy that I have him, and I’m excited to see what else he can do.”

Hannah Irons, 19, of Queenstown, Md., rode her Scola Bella, a 10-year-old Hanoverian mare, to a 65.17 percent, which secured the gold medal.

“Going in last at my first NAYC, I have to admit I felt a little bit of pressure,” said Irons. “Normally, I’m not one to get nervous, but after [teammate Kayla Kadlubek’s] amazing ride, I was a little bit. When I was getting on, Kayla said to me, ‘Hannah, go out there and have fun.’ I think that’s what teamwork is really about. I’m really proud of my horse for keeping her cool today. We didn’t have quite our best ride, but she gave me all she had to for the team.”

Irons has been riding Scola Bella for two years, and this is her first NAYC appearance. “She was actually graciously donated to Dressage4Kids by Deb Mullaney, so I’m very thankful to her and Lendon Gray and everyone who made that possible for me,” said Irons. “My horse felt amazing in the warm-up. As we went down the center line, I just felt like we got a bit nervous, but we pulled it together. She and I have to rely on each other sometimes, because she gets a little nervous. She’s new to this as well. In typical Bella fashion, she did just enough to pull it off!” 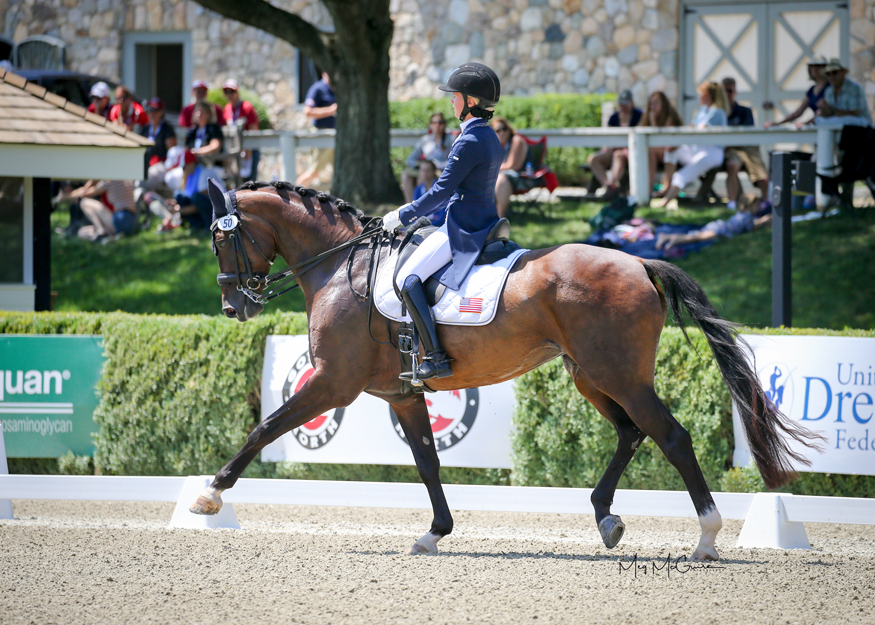 Anna Weniger, 20 and from Apex, N.C., is an NAYC veteran, with three previous appearances, two team bronze medals, and the individual freestyle gold medal from 2018 on her resume. This year, she rode a new mount, Claudius, a nine-year-old Hanoverian gelding owned by Andrew Weniger, to a score of 62.09 percent. “My test today had some moments of brilliance and some mistakes,” said Weniger. “I’m very proud of my horse; this is his first season at Prix St. Georges. He’s actually my dad’s horse, and he tried his little heart out. He tries a little too hard sometimes, but the moments of brilliance are there and I’m really excited to get this experience and see where it goes in the future.”

Weniger hadn’t planned to return to NAYC after she and her gold-medal mount Don Derrick moved on to the Under 25 Grand Prix classes, but when the opportunity came up to ride Claudius for Region 1, she jumped at it. “It’s super fun to be here with Region 1 again,” she said. “Region 1 is such a great family. We bond so quickly, and there’s so much support for us in our region throughout the year. Debbie DelGiorno, our chef d’equipe, is always there to support us. It really feels like winning this team medal has been a huge team effort.” 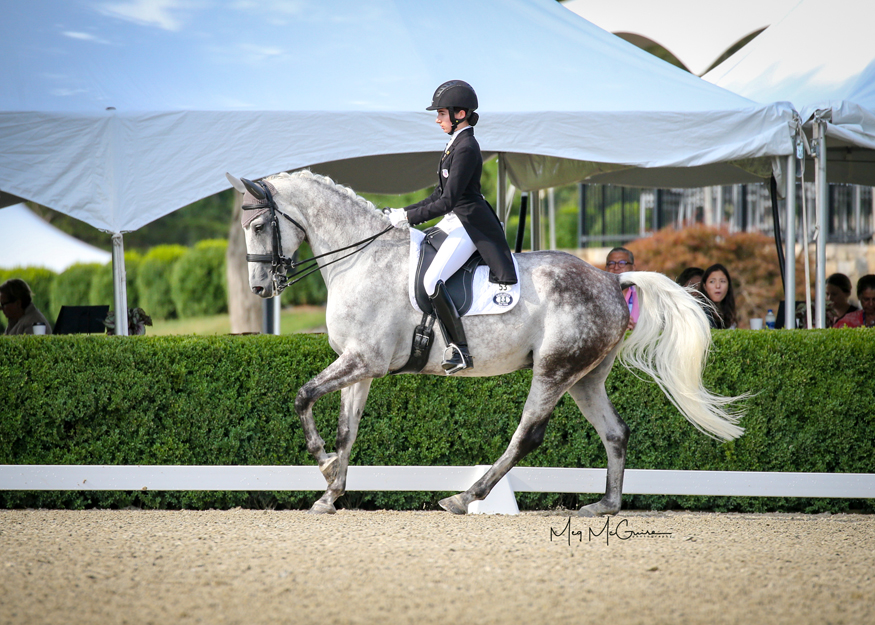 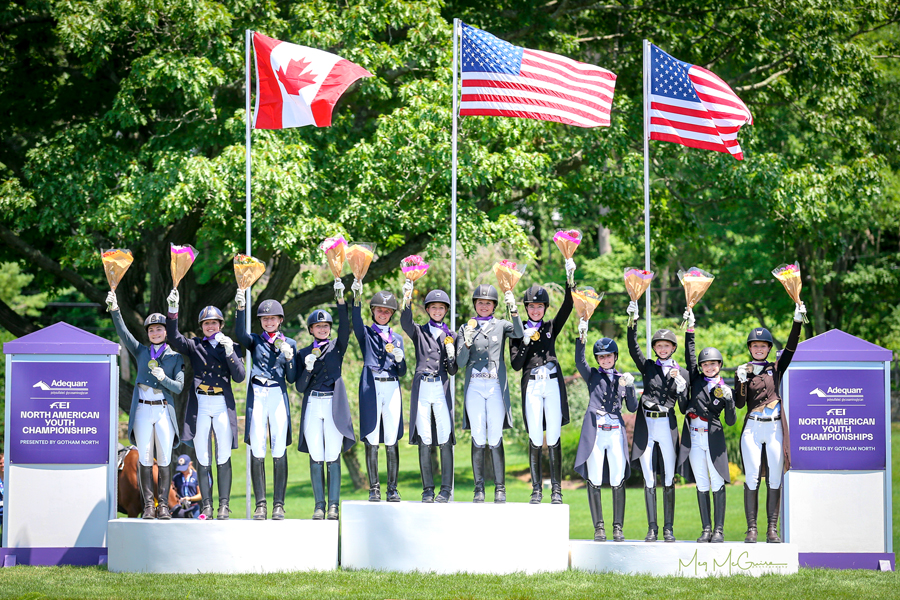