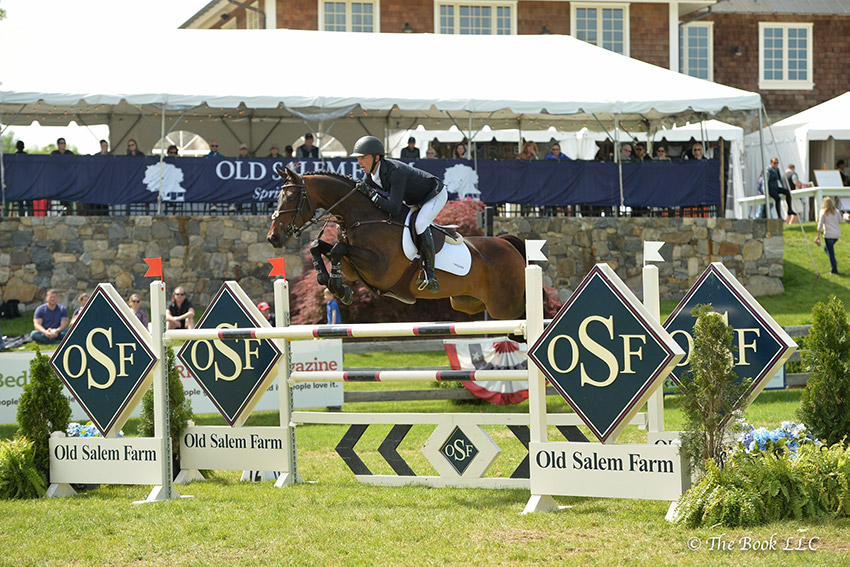 Ramsay originally hails from San Francisco, CA, and is competing at Old Salem Farm for the first time during the 2017 Spring Horse Shows. After several top finishes throughout the two-week show, Ramsay and Stranger 30, owned by The Stranger Group, were the final pair to return in an 11-horse jump-off over tracks built by 2017 Longines FEI World Cup™ Jumping Final course designer Alan Wade (IRL).

Placing first and third on Saturday, Ramsay also piloted California 62, owned by The California Group, to a time of 32.63 seconds to round out the top three. Devin Ryan (USA) was fourth riding Eddie Blue, owned by LL Show Jumpers, LLC, after finishing double-clear in 32.90 seconds, and Mario Deslauriers (USA) capped the top five aboard Bardolina 2 in 33.70 seconds for Wishing Well Farm, LLC. 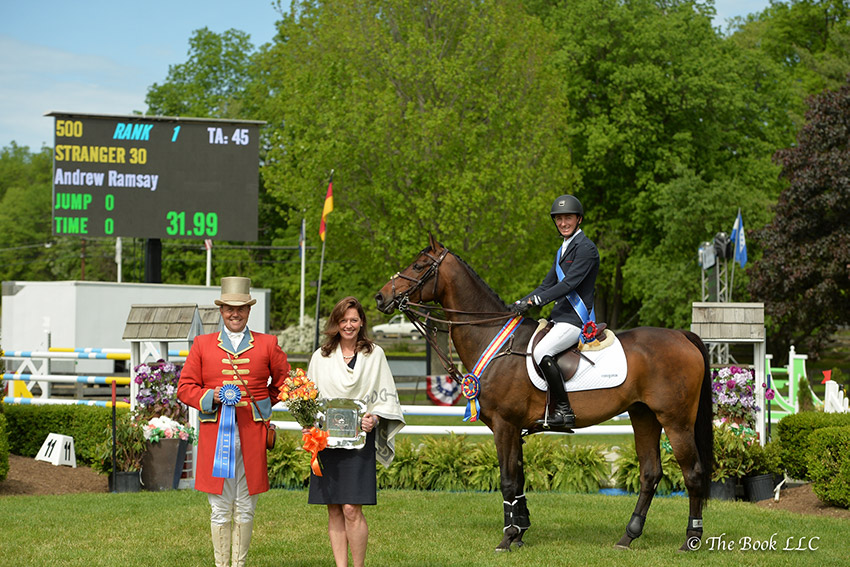 After recently partnering with U.S. Olympic gold medalist Chris Kappler, Ramsay is now based in Wellington, FL, and will be competing more on the East Coast in the coming months.

“It has been a great experience to be here,” said Ramsay. “Showing on the field is wonderful. It is a nice, natural field with some slope, and the ground is good. McLain is very fast and for the last week he has been beating me, so we decided to give it a go today.”

Of his jump-off round, which beat Ward’s by less than a second, Ramsay noted, “Stranger is naturally a very quick horse. He is quick across the ground and quite quick over the fences, so he is effective and that helps. I think we had a small edge everywhere and it was a lot of fun.”

Ramsay has had the ride on Stranger 30 for a year and a half and considers the mount a joy to ride, saying, “He is amazingly competitive. He is careful, quick, and really wants to please. He was just out there helping me out today.”

Amateur rider Callie Seaman of Greenwich, CT, led the victory gallop in the $10,000 USHJA International Hunter Derby, presented by The Gochman Family, for her first international derby win riding her own Skorekeeper. 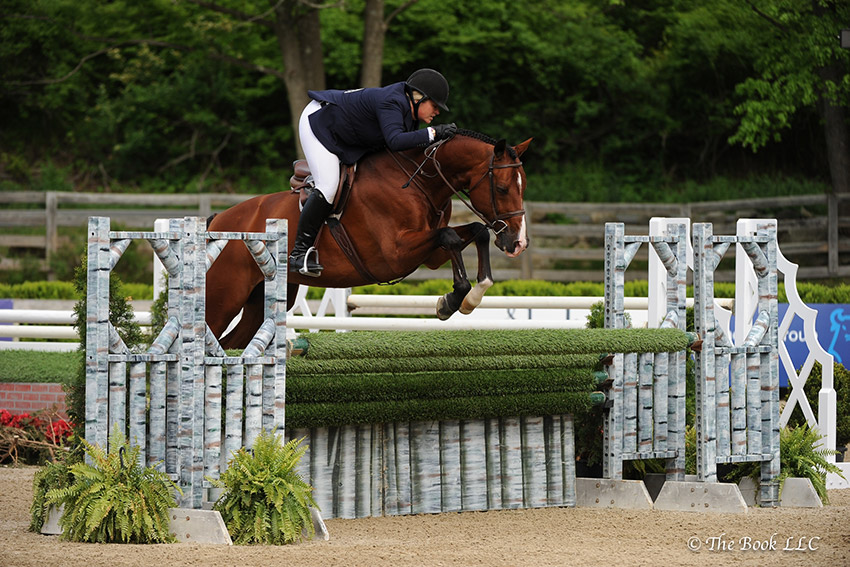 Callie Seaman rode Skorekeeper to a victory in the $10,000 USHJA International Hunter Derby, presented by The Gochman Family, on Saturday, May 20, during the 2017 Old Salem Farm Spring Horse Shows at Old Salem Farm in North Salem, NY. Photo by The Book

Seaman and Skorekeeper, a 13-year-old Warmblood gelding by Casall were sitting second on a first-round score of 171, and returned with the top 12 to complete the second handy round set by course designer Eric Mayberry of Myakka City, FL. Seaman posted a score of 187 over the handy track to earn a final score of 358 for the win.

“The handy is always my favorite round,” said Seaman, 28, who posted the top handy score of the day. “Scorekeeper is a super handy horse, and I actually breathe better going into the second round because that’s what he and I are best at.

“This is one of my favorite shows,” continued Seaman of the Old Salem Farm Spring Horse Shows. “It is always the first show back after a little break from Florida, so the horses always feel nice, fresh, and well-rested.” 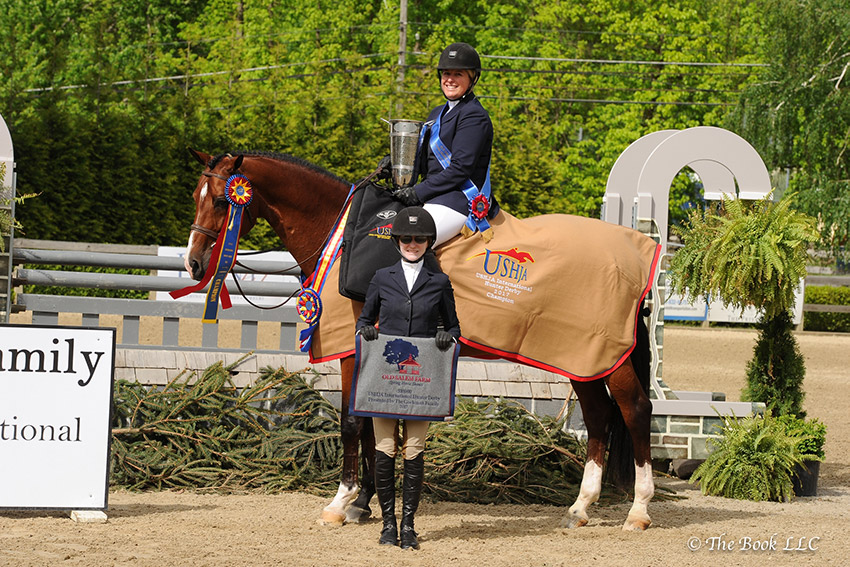 Becky Gochman presents Callie Seaman and Skorekeeper as winners of the $10,000 USHJA International Hunter Derby, presented by The Gochman Family, during the 2017 Old Salem Farm Spring Horse Shows at Old Salem Farm in North Salem, NY.
Photo by The Book

Seaman rides as an amateur, but competed against professionals, amateurs, and juniors alike in the international derby format on Saturday.

“As an amateur, you are hoping to do as well as the professionals, so to go in and win is an unexplainable and really exciting feeling,” she said. “I have had Skorekeeper for three years and done him consistently in the derbies and I have always come close, so to finally win is really exciting and a dream come true coming off what has been a year of dreams come true so far.”

For Harte, Saturday’s derby was her first with mount Style, and the pair was able to pull off a second-place ribbon.

“He is an incredible horse to ride,” she said of Style. “He is very scopey, and he handled it really well. The biggest thing that I have had to learn in riding that horse is that his stride is so big. You just go slowly and sit still. Sometimes for me that is hard.”

Fifteen-year-old Alexa Aureliano also experienced a first after recently moving up from exclusively piloting ponies to get the ride on Qualitat. Of their third-place finish in their first international derby together, Aureliano noted, “He kind of just took me right around. He is very special – he had some baby moments in the ring, but he was super good for his first real derby.”

Under 25 competition is in its second year at the Old Salem Farm Spring Horse Shows and saw a win for 22-year-old Shawn Casady of Midtown, TN, in the $15,000 Under 25 Grand Prix, presented by Douglas Elliman Real Estate, on Saturday. 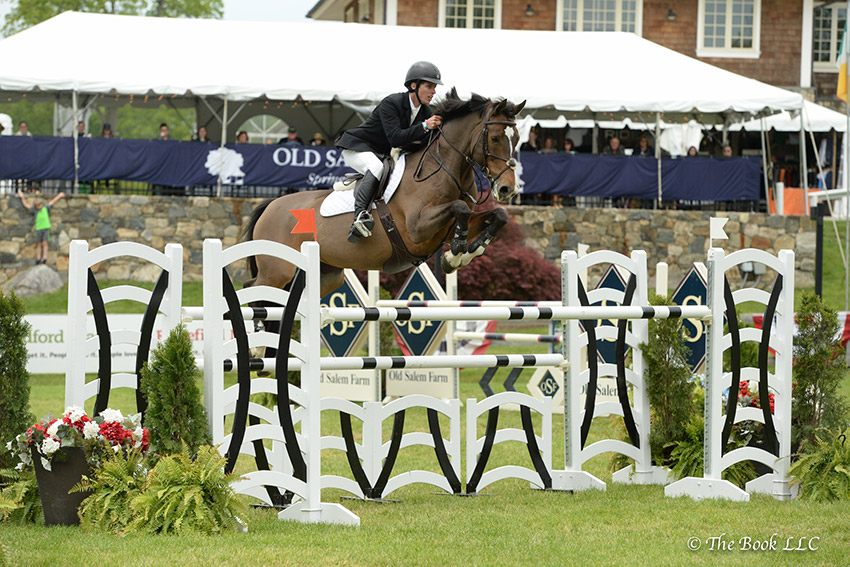 Shawn Casady and Vanilla won the $15,000 Under 25 Grand Prix, presented by Douglas Elliman Real Estate, on Saturday, May 20, during the 2017 Old Salem Farm Spring Horse Shows at Old Salem Farm in North Salem, NY. Photo by The Book

Casady was the final rider in a six-horse jump-off riding Vanilla for Abigail Wexner. Crossing the timers clear in 43.298 seconds, Casady topped second-place finisher TJ O’Mara by half of a second for the win. O’Mara of Rumson, NJ, piloted Queen Jane, owned by Walstib Stables, LLC, to a final time of 43.770 seconds. Christina Firestone of Upperville, VA, finished third riding Arwen for Mr. & Mrs. Bertram Firestone with the fastest four-fault jump-off round in 40.518 seconds. Sydney Shulman of Greenwich, CT, placed fourth riding Wamira, owned by BCF Group, LLC, with four faults in 44.875 seconds. Rounding out the top five, Lucy Deslauriers of New York, NY, piloted Curo to a rail and a time fault in 50.808 seconds for owner Mario Deslauriers.

“There weren’t too many places where you could take a shot,” said Casady, who rides for John and Beezie Madden based in Cazenovia, NY. “My strategy was to give her the best chance she could to do the numbers and hope that since I was on a little faster mover I could make the time. A half of a second is a little too close for comfort, but I am glad to win.”

Casady piloted Vanilla, a 15-year-old Danish Warmblood mare (Nabab de Reve x Clinton), which is a former grand prix mount of Beezie Madden. According to Casady, the horse’s experience with Madden benefited him today, saying, “She has endless scope, a massive stride, and is as brave as they come. You can walk into any venue, any ring, and she is not going to blink an eye.” 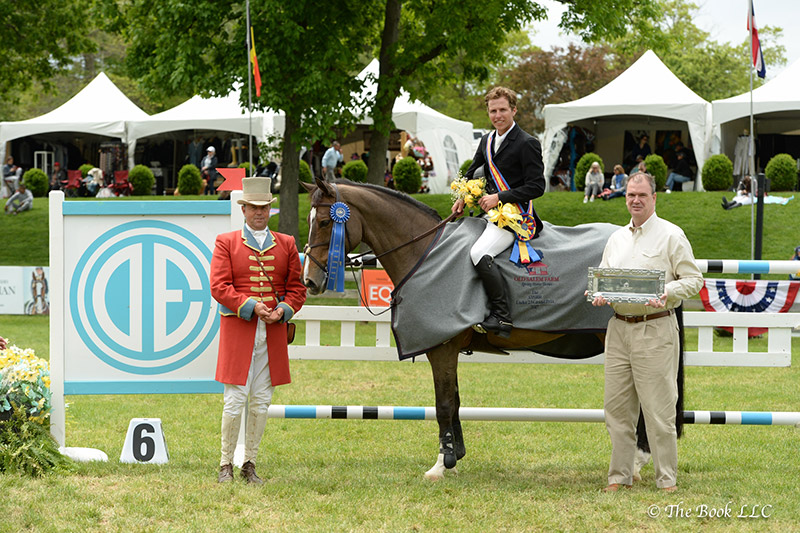 O’Mara, 18, and Queen Jane had only been in one other jump-off before Saturday’s competition, but were the ones to beat until Casady’s final trip.

“She has always had the scope and the stride to do these classes,” said O’Mara of Queen Jane. “She was really a good prospect for me when we bought her. This past Florida we started really stepping her up into the bigger levels, the U25 classes, and the two stars. She’s coming along really nicely.”

Twenty-one-year-old Firestone rounded out the top three on a very familiar mount in Arwen. Bred by Firestone’s family, she got the ride on the 12-year-old mare at the start of its seven-year-old year.

Under 25 competition serves to bridge the gap between junior competition and the top grand prix level and has experienced popularity at the Old Salem Farm Spring Horse Shows during the past two years.

“As a young professional, I don’t have the financial backing to do this by myself,” concluded Casady. “This division gives me a place to showcase myself and to hopefully make a name for myself in order to break into the bigger classes and gain the support it takes to get to the top of the sport.”

Jumper competition reaches its peak on Sunday, May 21, when the $130,000 Empire State Grand Prix CSI3*, presented by The Kincade Group, takes the stage at 2 p.m. The class will be available to view on the Old Salem Farm Spring Horse Shows live stream at OldSalemFarm.net or USEFNetwork.com. Highlighting hunter competition on Sunday, Grand Champion honors will be presented for the Pony, Children’s, and Junior Hunter divisions.