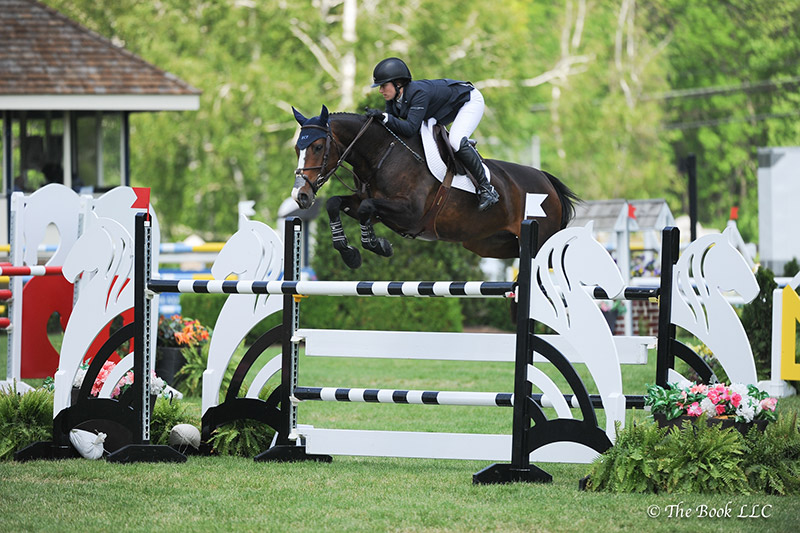 Shulman (22) piloted Venice, a 12-year-old Swedish Warmblood mare owned by Jill Shulman, to one of five clear rounds over a speed track built by Alan Wade (IRL). Stopping the clock at 69.121 seconds gave her the win over Jordan Coyle (IRL), who rode his own Harakin Z to second place in 71.124 seconds. Shulman was also third riding Wamira, owned by BCF Group, LLC, with a time of 71.916 seconds. Ian McFarlane (USA) was fourth riding Cora 572 for Buribbons, LLC, in 72.921 seconds, and Ailish Cunniffe (USA) rounded out the top five with a time of 74.400 seconds aboard Baloucento 2 for owner Whipsick Farm.

Friday’s class marked Venice’s return to the 1.45m level after a series of health issues sidelined the mare for more than two years. The horse suffered from kidney failure just eight months after joining Shulman’s string. After making a miraculous comeback, the mare then underwent colic surgery last summer.

“She is extremely special,” said Shulman. “Anytime I get to ride her I am so lucky because she was not supposed to be alive after either situation. I feel really lucky that she is back doing this, and winning is icing on the cake. 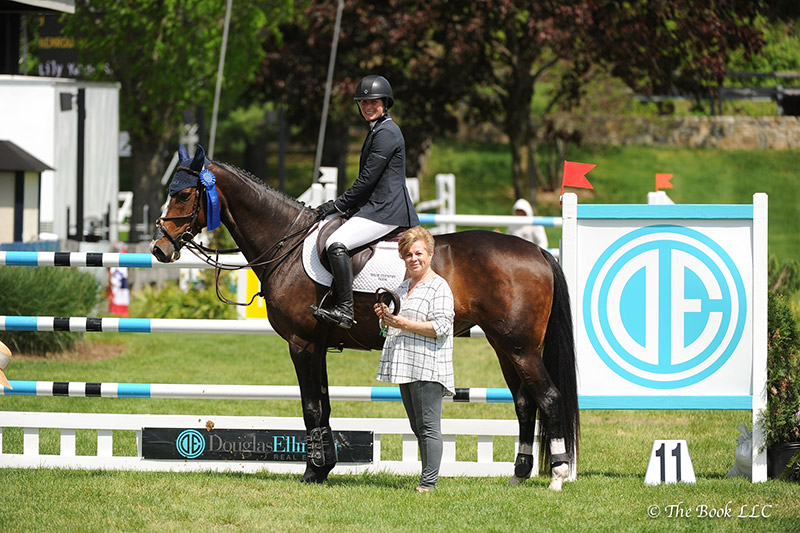 “I have never had a horse that wants to win more than I do,” continued Shulman. “She tries so hard and has the biggest heart. She wants to win every single class she goes in, and that is a really cool feeling. The more you run her, the better she jumps, so for speed classes she is so game.”

Shulman competes regularly in the Under 25 Jumper Division, which was formed as a way to bridge the gap between junior competition and the grand prix level.

“I think it is an amazing division,” she said. “These horses are not ready to jump the two-star and three-star grand prix, but it is nice to be able to compete them at the 1.45m level against similar horses. I wish they offered this division at every horse show, because it is such a good stepping stone for up-and-coming horses and riders.”

For second place rider Jordan Coyle, Friday’s courses offered some familiarity for him and the horse Harakin Z, which he co-owns with his brother Daniel. 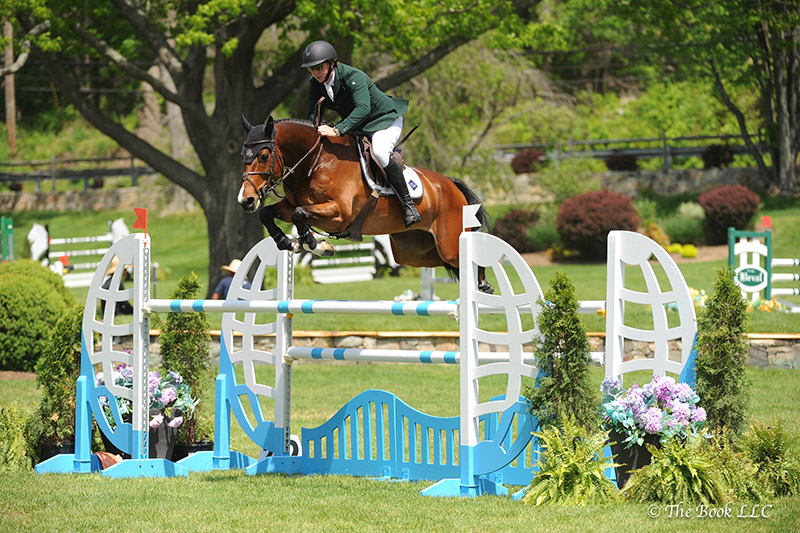 Jordan Coyle and his own Harakin Z were second in the $5,000 Under 25 1.45m, presented by Douglas Elliman Real Estate, on Friday, May 19, during the 2017 Old Salem Farm Spring Horse Shows at Old Salem Farm in North Salem, NY; photo © The Book

“I have known Alan Wade for a long time because he built a lot of courses back in Ireland, and I have jumped many of his tracks before,” said 24-year-old Coyle, who is now based out of North Salem, NY, as a rider for Old Salem Farm. “It was really nice to see his courses here in the U.S., and they worked out really well for me today. My horse is very careful, and we were able to show that off a little.”

Closing out the day on the Grand Prix Field, crowds gathered for the $5,000 Grooms’ Class, presented by Old Salem Farm. Awards in both a hunter and jumper section were presented with Heritage Farm groom Humberto Valadez taking home the hunter win with Fetching, owned by Lexi Maounis, and Christopher Cook winning the jumper honors with Tina La Boheme, owned by Susie Heller and McLain Ward. 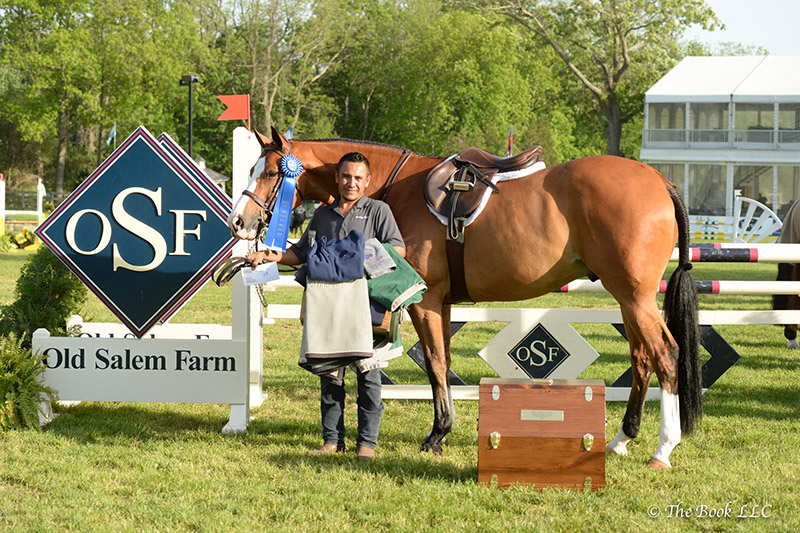 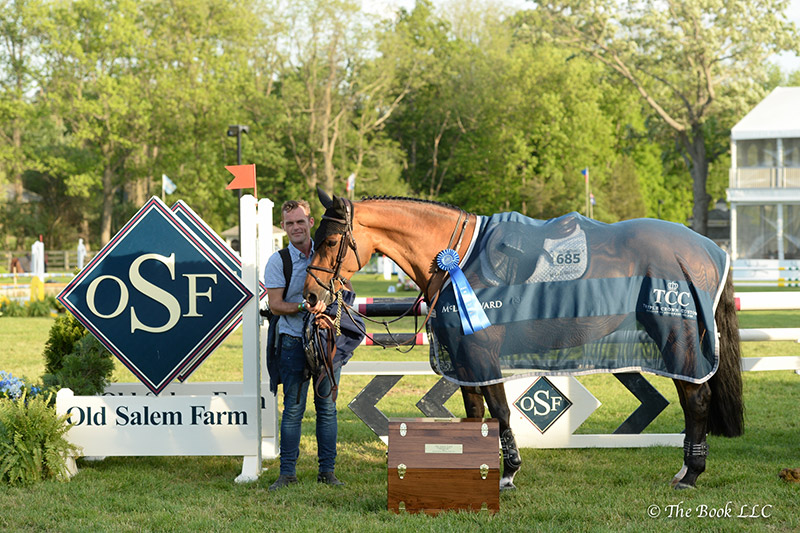 Under 25 competition continues Saturday with the $15,000 Under 25 Grand Prix, presented by Douglas Elliman Real Estate, in addition to the $35,000 Old Salem Farm Jumper Classic CSI3*, presented by Wells Fargo. Competition on the main Grand Prix Field will be live streamed on USEF Network and at www.oldsalemfarm.net. Highlighting hunter competition on Saturday, the $10,000 USHJA International Hunter Derby, presented by The Gochman Family, takes the stage, and the Grand Amateur-Owner Hunter Champion will be crowned. The USHJA International Hunter Derby will be live streamed at www.shownet.biz.

Spectators are welcome at the Old Salem Farm Spring Horse Shows. General admission to Old Salem Farm is free Wednesday through Friday. On the weekend of May 20-21, admission is $15 for adults and $10 for seniors and children under 12. Tickets are available at OldSalemFarm.net.