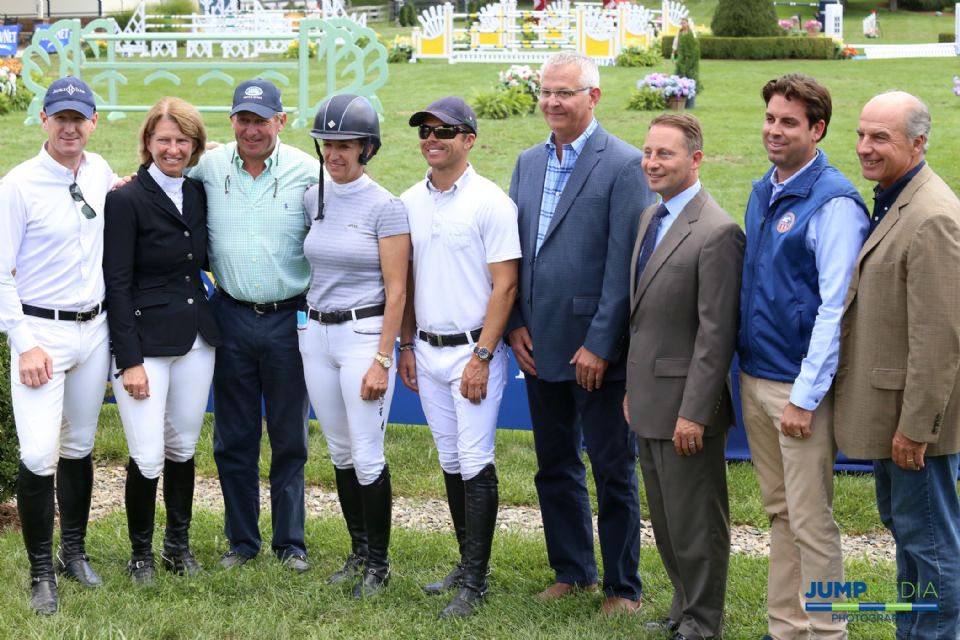 Old Salem Farm hosts more than 30 weeks of horse shows at its North Salem, NY, venue, including the Old Salem Farm Spring Horse Shows in May and the American Gold Cup this week. As a result, an economic impact study conducted by the Sport Management Research Institute revealed significant benefit to the local economy. This week alone, 17 countries are represented at Old Salem Farm over the next several days with 70 of the world’s top riders showcasing 143 international-level horses.

Astorino acknowledged the role Old Salem Farm and its events play in the local economy, stating, “Over the course of the week people from all over the world come to Westchester County, eat in our restaurants, stay in our hotels, and support our businesses. The tourism and economic impact is a major one. A lot of new dollars come into this county over the course of this week, boosting our businesses and helping our tax payers. In 2015, Old Salem Farm created over 2,000 jobs, and we had over $50 million in tax revenue alone poured into our county.”

“We are very fortunate to have Old Salem Farm here, and we are really proud of this event. It has been a great partnership since day one,” continued Astorino. “We in Westchester County and in the northeast have an equestrian history that maybe is second to none.” 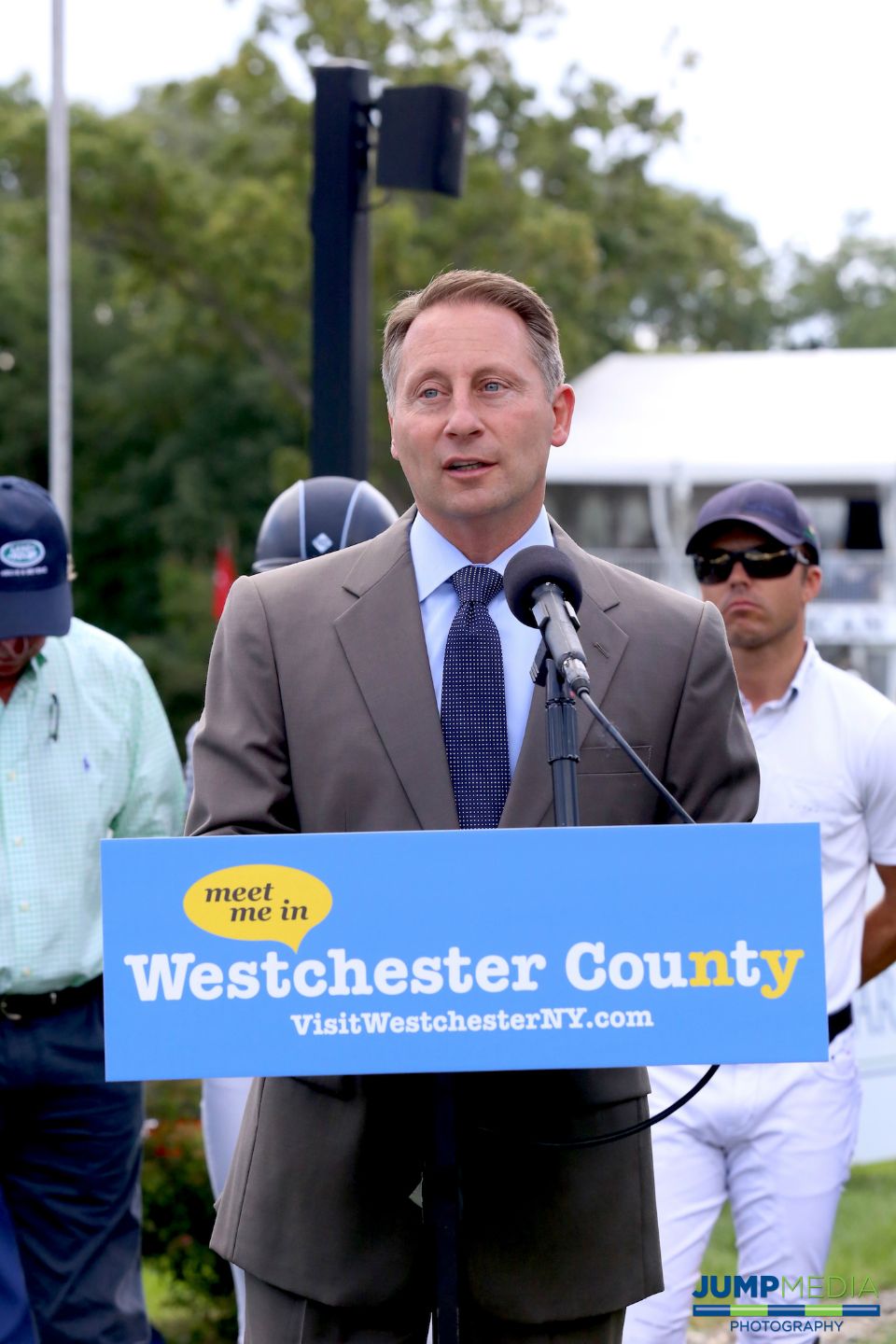 Westchester County Executive Robert Astorino speaks about the economic impact Old Salem Farm and its events have on the local community. Photos by Jump Media Photography

At the forefront of the equestrian culture that exists in New York State, Old Salem Farm has undergone significant growth since 2001 when Kamran Hakim, his wife Ellen, and their family became the sole proprietors of the property. Hakim launched a series of projects to improve the barn, the rings, the footing, and the property as a whole at that time. The result of his dedication is what attracts acclaimed riders and horse sport fans to the farm today.

“It is an honor for me to be a part of the team here at Old Salem Farm alongside trainer Frank Madden, and we make a special effort to play a role in the community as well as welcoming riders and horse owners from all over the world for events,” said Old Salem Farm Manager, Alan Bietsch. “We are dedicated to giving back to Westchester County through events like this, and we are delighted by the support that the local residents, visitors, and government officials have shown the farm and its shows in return.”

“We work very hard to make this venue one of the best in North America, and to see those efforts translate into $282 million of economic impact for the local area is very satisfying,” continued Bietsch. “We are proud to call Westchester County home and want to encourage its residents to come experience horse sport and enjoy the farm, while at the same time showcasing to our exhibitors what Westchester County has to offer in the forms of shopping, dining, and local attractions.”

Old Salem Farm has not only had a positive impact on the equestrian culture within North America and the local Westchester County community, but has also become well-known on the international stage of horse sport. Representing the FEI, John Madden was quick to note the thriving popularity of show jumping within the U.S. thanks in part to efforts of venues and organizers like Old Salem Farm. 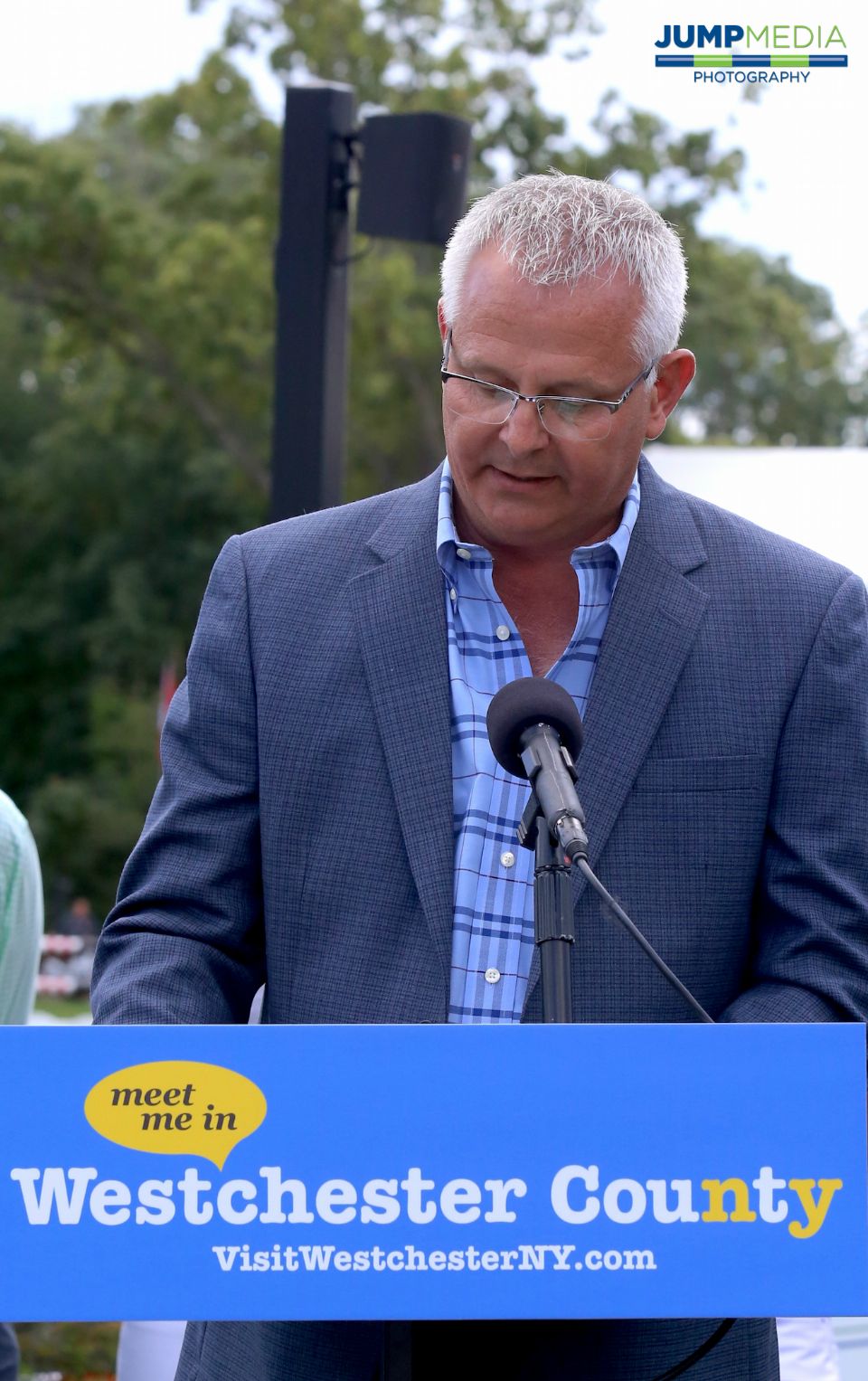 “We are very happy at the FEI to hear the recognition from the county and the state about the good things our sport brings to the community,” said Madden. “Many of us just returned from the Olympic Games in Rio, and we are now here in Westchester County riding the crest of a wave created by the Olympic Games. The FEI is committed to working with organizers like we have here at Old Salem Farm to provide global coverage and outreach to fans and media around the world and to create more opportunities to experience wonderful venues in states and counties like we see here at Old Salem Farm.”

One of the riders returning to the U.S. after claiming a team silver medal in Rio is McLain Ward. A force to be reckoned with at the highest level of show jumping, Ward hails from Brewster, NY, and while he travels all over the world to compete, is still dedicated to growing the sport at home. When asked what it means to him to be able to come home and still have top sport in his backyard, Ward admitted that he takes pride in the efforts of Old Salem Farm to bring the best of horse sport to the local stage.

“I was born and raised and lived my whole life in this community,” he said. “I’m a very proud New Yorker. This is a horse community; its roots are with agriculture. To have such a high quality event here at Old Salem Farm with such a high level of horses and athletes is really something special and something we as a community can be very proud of. For us who are on the road so much of the year, the novelty is going home, not to another hotel. I think what has happened here at Old Salem Farm in the last few years has really produced a world-class show jumping venue, and I hope everyone comes out to support it so it can continue for many years.”

Old Salem Farm, located just one hour north of New York City, is one of the best equestrian competition venues in North America, as rated by the North American Riders Group in 2011 through 2015. Host of the Old Salem Farm Spring Horse Shows, the prestigious American Gold Cup CSI 4*-W, and year-round competitions, the facility offers a state-of-the-art turf grand prix field, indoor riding arena, and two all-weather footing rings. For the past five years, the North American Riders Group (NARG) has recognized the Old Salem Farm competitions on their NARG Top 25 List. As a boarding and training facility, Old Salem Farm is second to none and home to top trainer Frank Madden. For more information on Old Salem Farm, including its yearlong competition schedule, prize lists, clinics, boarding, lessons and training, visit www.oldsalemfarm.net or call 914-669-5610.