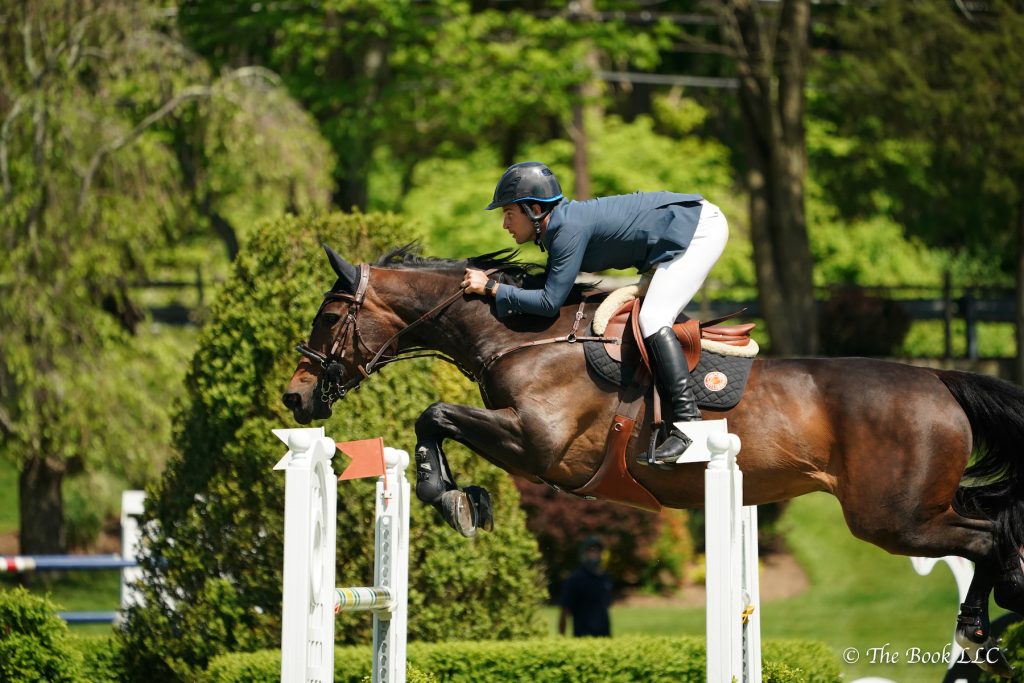 Bluman and Sancha LS, a 16-year-old SLS mare (Chin Chin x Polydor), have been competing as a team for ten years and their strong partnership paid off at Old Salem Farm. The final pair to tackle Ken Krome’s (USA) jump-off course from an original field of 28, Bluman and Sancha LS were chasing Madison Goetzmann (USA) and her own Prestigious. They sat as the current leaders on a time of 38.10 seconds with only Bluman to return in a seven-horse tie-breaker.

“I knew what I had to do and she has done it for me so many times,” said Bluman of Sancha LS after saving the best for last and posting a winning time of 37.97 seconds. “Madison put up a good target, but I used Sancha’s big stride and gave it a go. I’m happy that it worked out for us.”

A seasoned horse, Sancha LS is showing no sign of slowing down, according to Bluman. Noting that the mare felt the best she ever has while galloping across the Old Salem Farm Grand Prix Field, Bluman was overjoyed with her performance.

“I can only say good things about her,” he said. “It’s been a blessing to have her and I consider every chance I have to go in the ring with her a blessing. She owes me nothing!” 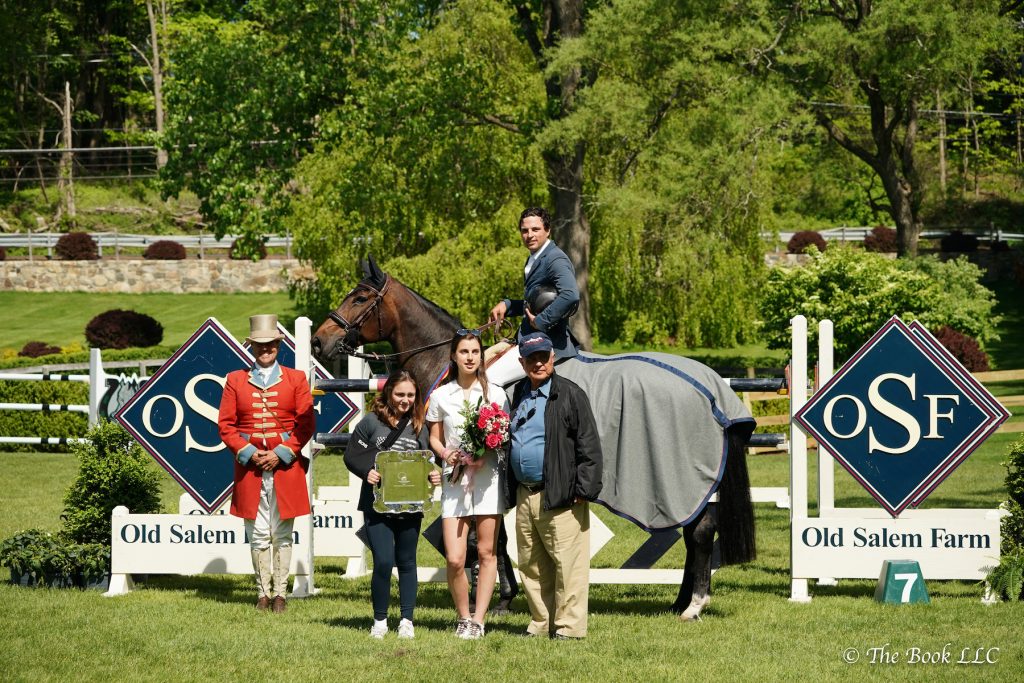 Daniel Bluman (ISR) and Sancha LS are presented as winners of the $35,700 Old Salem Farm Jumper Classic CSI3* by Ringmaster Alan Keeley and The Hakim Family on Saturday, May 18, during the 2019 Old Salem Farm Spring Horse Shows at Old Salem Farm in North Salem, NY. Photo by The Book

“I told my wife two years ago that this was going to be home and we just bought a farm right around the corner,” said Bluman. “I love it here and being out on the field. And when the weather doesn’t help, we always have the option to jump in very good footing in the sand.”

The plan at the start of the week was for Lexi Maounis to pilot her own Sonder in the $5,000 USHJA National Hunter Derby, presented by The Gochman Family. When a scheduling conflict prevented that from happening, Heritage Farm trainer Patricia Griffith got the call asking her to take on the ride. The last-minute switch proved a positive, and Griffith rode Sonder to scores of 90 and 94 in the two-round derby to take the win over Michael Zukerman and Cue The Blue. 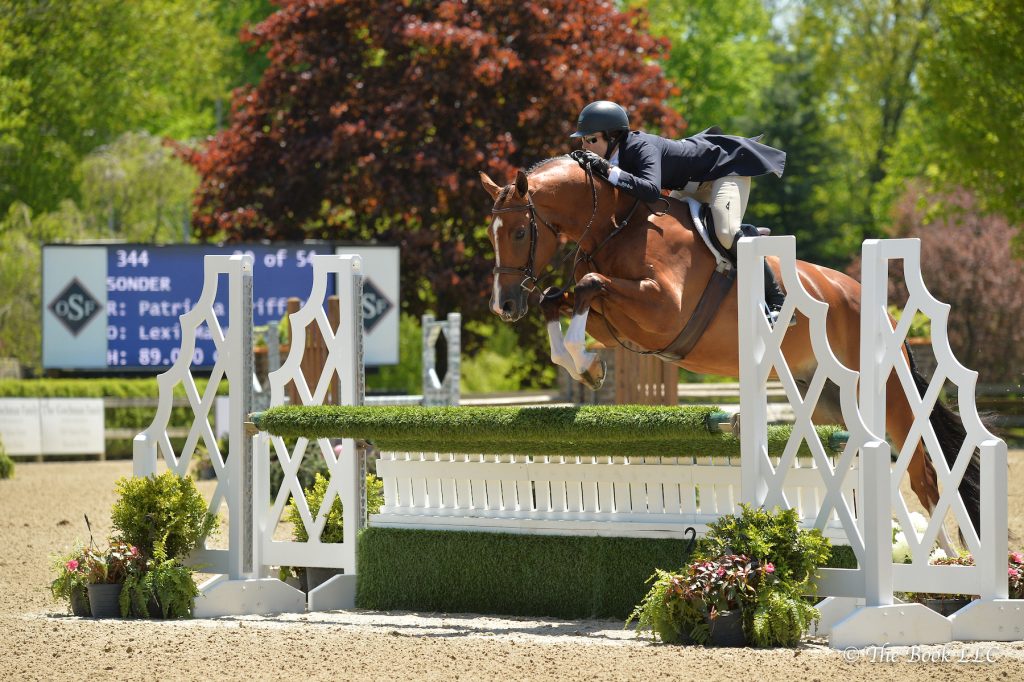 Patricia Griffith and Sonder won the $10,000 USHJA National Hunter Derby, presented by The Gochman Family, on Saturday, May 18, at the 2019 Old Salem Farm Spring Horse Shows at Old Salem Farm in North Salem, NY. Photo by The Book

Impressing the judges in the second-round handy trip, Sonder is three-for-three in derby competition after also winning in Lexington, KY, and Saugerties, NY, last year. This year, they returned to Old Salem Farm to celebrate a special anniversary.

“We got him before Florida last year and his first hunter show was here last year when he was champion in the 3’ pre-greens,” said Griffith, who hails from New York, NY, and also competes the mount in the 3’3” pre-green ranks. “He has been a great horse for us and his owner Lexi also shows him in the adult hunters.”

Griffith and Sonder bested a field of 50 over courses set by Nick Granat of Palm Beach, FL. Their total score of 184 took the lead by nearly 10 full points.

“For these classes you need that super brave, good jumping, athletic horse and he’s all of that,” said Griffith of Sonder, a six-year-old Westphalian gelding by PR.H. Valeron. “He’s up for the challenge and really gets into the handy. When you challenge him like that it always makes him better.” 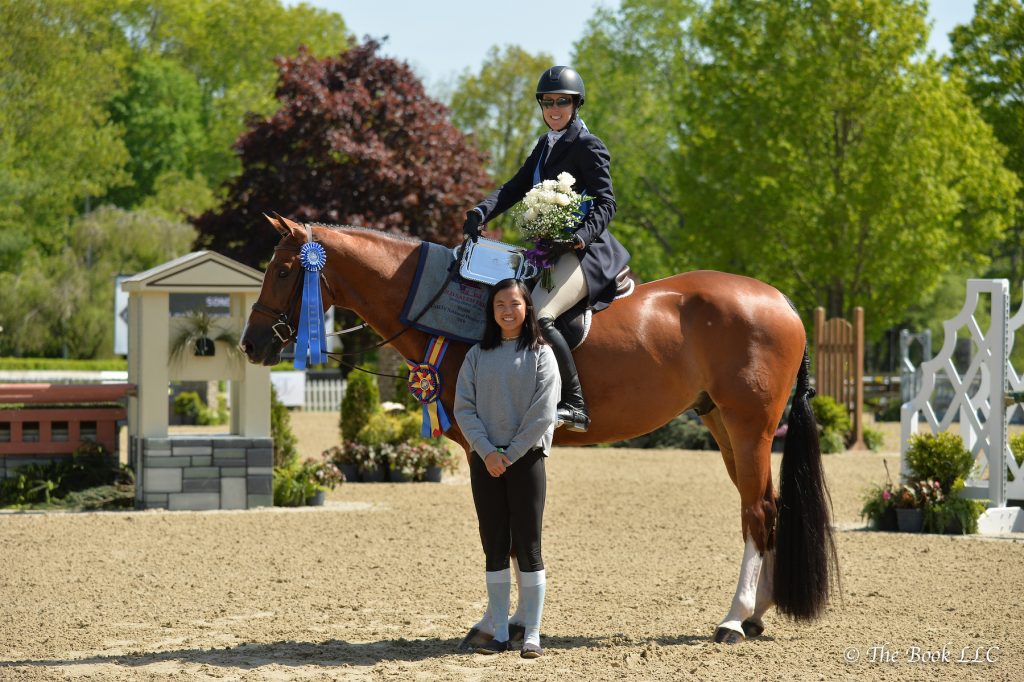 Patricia Griffith and Sonder are joined by Mimi Gochman representing The Gochman Family after winning the $10,000 USHJA National Hunter Derby on Saturday, May 18, at the 2019 Old Salem Farm Spring Horse Shows at Old Salem Farm in North Salem, NY. Photo by The Book

Heritage Farm, based in Katonah, NY, and led by Griffith and Andre Dignelli, made easy work of their 20-minute commute to the farm and is competing at the Old Salem Farm Spring Horse Shows in full force. “We love having a show where we can stay in our own beds,” joked Griffith. “It’s a great facility, and we are so lucky to have it so close to home.”

Zukerman and Cue The Blue posted a score of 174.5 to take second for owner Dawn Oliveri, while Layla Kurbanov finished third with a 174.25 riding her own Calberon B. Caroline Blake and Everglow, owned by Bluewater Farm, finished in fourth on a 174, and Kelly Lively piloted Catherine Kenny’s Bliss to cap the top five with a score of 173.5.

Sydney Shulman and Villamoura Reunite for Under 25 Grand Prix Victory

While competing at the 2018 American Gold Cup at Old Salem Farm, Sydney Shulman’s mount Villamoura sustained an eye injury and has been sidelined for the past eight months. They returned to the show ring at the Old Salem Farm Spring Horse Shows and scored a win right out of the gate in the $10,000 Under 25 Grand Prix, presented by Miller Motorcars. 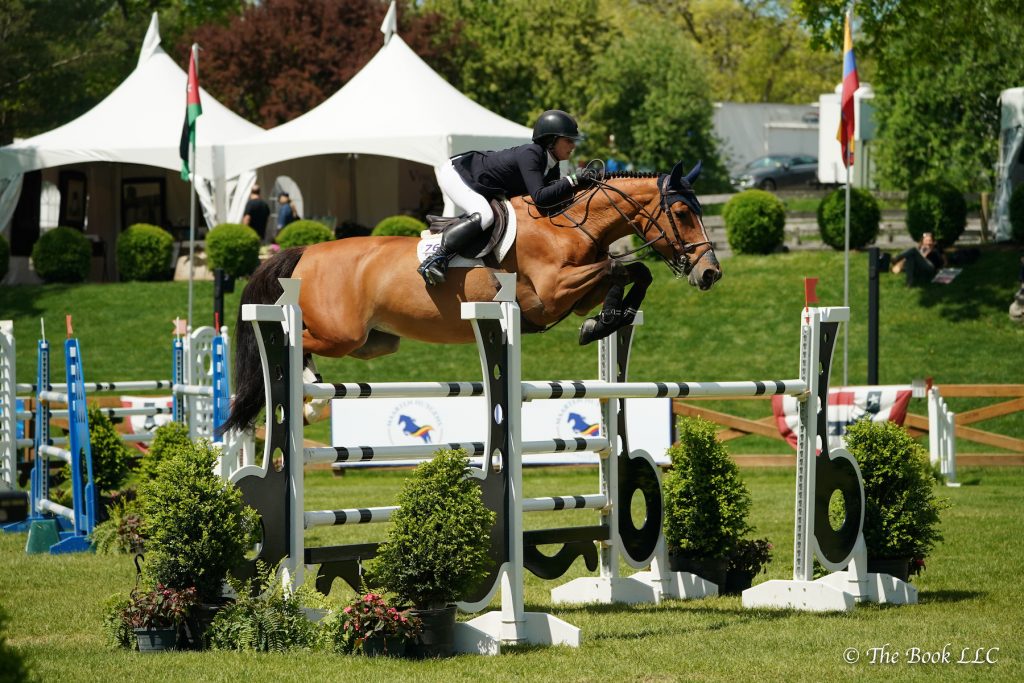 Sydney Shulman of Greenwich, CT, won the $10,000 Under 25 Grand Prix, presented by Miller Motorcars, riding Villamoura on Saturday, May 18, during the 2019 Old Salem Farm Spring Horse Shows at Old Salem Farm in North Salem, NY. Photo by The Book

“This is a huge deal for me because she’s my best horse, my favorite horse, and this was our goal to be able to show here this year,” said Shulman, whose mother Jill has owned Villamoura for four years. “We brought her back nicely and made sure she was fit enough for this. I’m beyond thrilled and so happy to have her back. I really missed her this winter.”

Shulman, 24, and Villamoura were one pair of seven to jump clear over the first round and advance to the jump-off. They returned and stopped the clock clear again in 35.340 seconds for the win over Jeremy Sweetnam (IRL) aboard Cliff Z for owner Gotham Enterprizes.

“I don’t think anyone knew what she was going to be until she won the 1.50m here at Gold Cup two years ago,” said Shulman. “She was a late bloomer, and it took a while to slow her down because she’s really hot. We took our time and now the sky is the limit for her.” 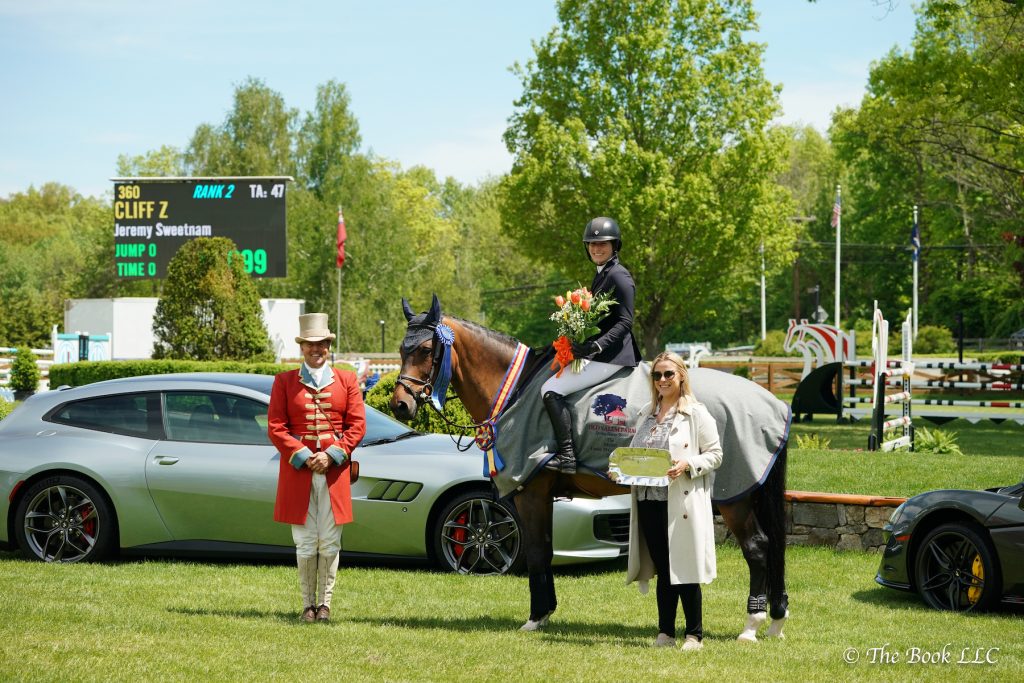 Sydney Shulman of Greenwich, CT, and Villamoura are presented as winners of the $10,000 Under 25 Grand Prix, presented by Miller Motorcars, by Ringmaster Alan Keeley and Chelsea Dwinell of Old Salem Farm on Saturday, May 18, during the 2019 Old Salem Farm Spring Horse Shows at Old Salem Farm in North Salem, NY. Photo by The Book

Based in Greenwich, CT, Shulman has been competing at Old Salem Farm since she was eight years old in the children’s jumpers. She and her family’s Back Country Farm have 27 horses competing during the Spring Horse Shows, two of which tackled the Under 25 Grand Prix.

“It’s wonderful to have a stepping stone division instead of having to jump a three-star grand prix against McLain, Beezie, Laura, and all the other top riders,” said Shulman, who has one final year to compete in the Under 25 ranks. “I wish I had many more years!”

Sweetnam settled for second in 36.099 seconds, while Caitlin Creel (USA) rounded out the top three riding her own Dynamis KC in 39.370 seconds.

International jumper competition comes to a peak on Sunday with the $133,700 Empire State Grand Prix CSI3*, presented by The Kincade Group. In the hunter ranks, the Grand Pony, Children’s and Junior Hunter Champions will be crowned.

Spectators are welcome at the Old Salem Farm Spring Horse Shows. On the weekend of May 18-19, admission is $15 for adults, $10 for seniors and children 10-15, and free for children under 10.