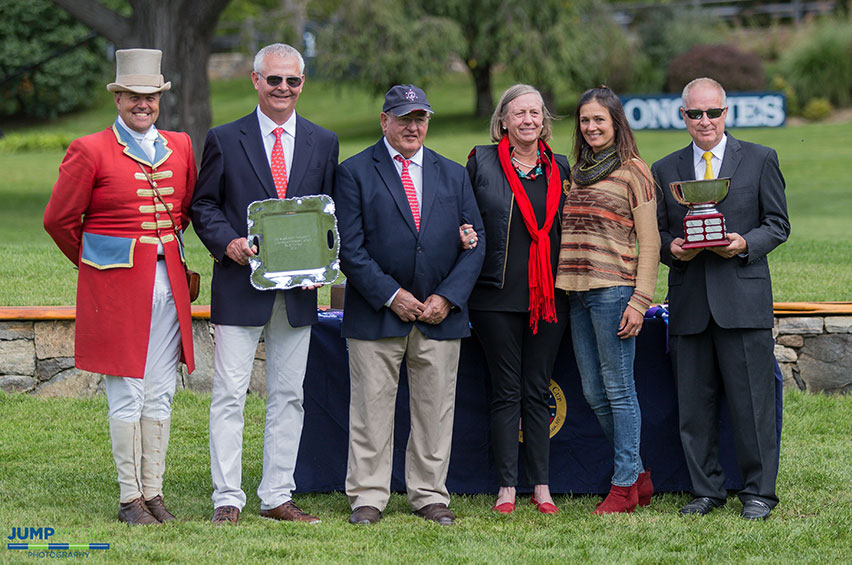 “Winning a lifetime achievement award is probably one of the biggest highlights of my career,” said Caristo, who has been attending show jumping events at Old Salem Farm since the late 1960s. “This is very much unexpected, but to win something like this here at Old Salem Farm where I have been coming for so long makes it even more special.

“When I was told that I had been chosen, I’m not afraid to admit that I cried,” continued a grateful Caristo. “It’s something that I will cherish for the rest of my life and I appreciated Old Salem Farm for presenting this award and everyone who was a part of it for choosing me as the recipient.”

Throughout his career, Caristo has been hailed as one of the most influential figures in the horse sport industry. He has judged major horse shows throughout North American and is a member of the Show Hunter Hall of Fame. As Chef d’Equipe for the United States Hunter Jumper Association (USHJA) Zone 2, Caristo has coached Youth Championships and Prix des States teams for two decades. This year, he coached Zone 2 to a record 13th team gold medal at the Adequan/FEI North American Youth Championships, presented by Gotham North, held at Old Salem Farm.

“What I like about being a Zone 2 Chef [d’Equipe] is bringing the riders together and helping them to understand what it means to be a team member,” said Caristo. “Then, of course, following their careers after they are done being a Zone 2 member.”

When he looks back on his time with Zone 2, Caristo recalls an especially fond memory, saying, “I can remember when we were at [Youth Championships] in Bromont in 2002 and Georgina Bloomberg was coming through the gate and she saw the bicycle jump from Spruce Meadows in the ring. She said, ‘The bicycle is in there!’, and I told her to just go jump it. She did and we won a team gold medal that year.”

The Old Salem Farm Foundation Lifetime Achievement Award is presented annually at the American Gold Cup. Nominations for the 2019 award may be submitted in the form of a letter or video outlining the nominee’s achievements and contributions to horse sport. Letter or video submissions should include contact information for the nominee and be sent to Chelsea Dwinell via e-mail at chelsead@oldsalemfarm.net.