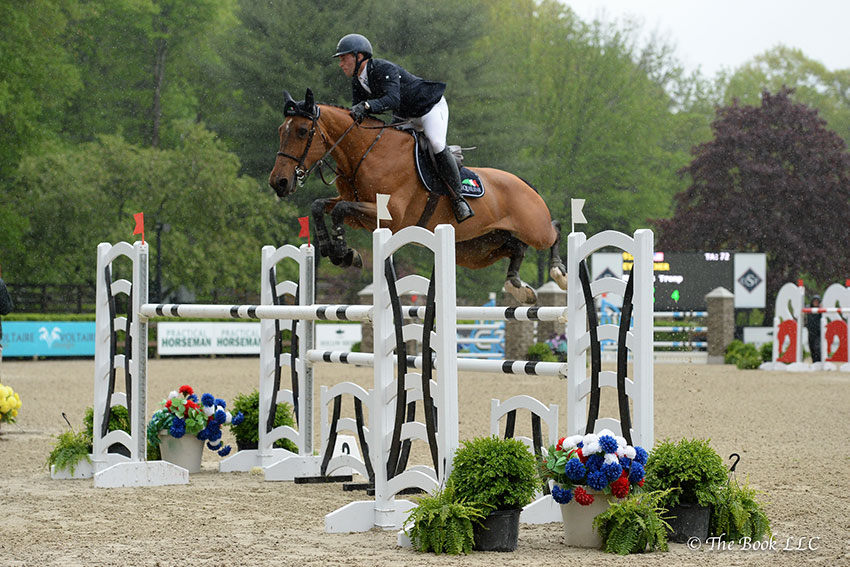 Mattias Tromp (USA) rode to victory in the $10,000 Old Salem Speed Stake CSI3* aboard Eyecatcher on Wednesday, May 16, during the 2018 Old Salem Farm Spring Horse Shows at Old Salem Farm in North Salem, NY. Photo by The Book

Speed was the name of the game for the 34-horse field that contested Wednesday’s one-round track. Fractions of a second separated the top four, but Tromp and Eyecatcher, a nine-year-old Dutch Warmblood mare (Harley VDL x Orthos), owned by Beyaert Farm, claimed the win in 51.41 seconds.

The time to beat was set early by U.S. Olympic team gold medalist and Tromp’s coach, McLain Ward, which held for 18 rounds before fellow U.S. rider Devin Ryan bumped him from the top spot. Just two horses later, Tromp, 23, caught them both. Ryan settled for second in 51.56 seconds riding his own Florida, and Ward moved to third in 51.72 seconds aboard Cerise for owner Sagamore Farms. Sydney Shulman (USA) finished fourth riding Ardente Printaniere in a time of 52.17 seconds, while Jonathan Corrigan (IRL) rounded out the top five on Javas Keltic Mist, owned by Steven Klein, in 53.07 seconds.

Tromp got the ride on Eyecatcher after Ward and François Mathy found the mare earlier this year in Switzerland under the direction of Swiss rider Romain Sottas.

“I started showing her halfway through the winter season in Wellington,” said Tromp of the new ride he purchased to develop into a sales horse. “I never actually got to try her and bought her straight off a video. For sure, she is a very competitive horse.

“Before we went in, McLain told me to do a set of numbers and I followed that plan and wasn’t thinking too much about the time,” continued Tromp of his plan for the class. “I found the jumps out of stride through the turns and I think that was the biggest thing.”

Tromp is hopeful for more top results with the mare, saying, “Once I get to know her a little better and understand the size of her step, I think it will start to fall into a routine.”

International jumper competition continues with the $35,000 Welcome Stake of North Salem, presented by Douglas Elliman Real Estate, while the Grand Adult Amateur Hunter Champion will be crowned in the Main Hunter Ring. The $5,000 Open Jumper 1.40m and the presentation of the Grand Hunter Champion will also take place on Thursday after being postponed on Wednesday due to inclement weather.