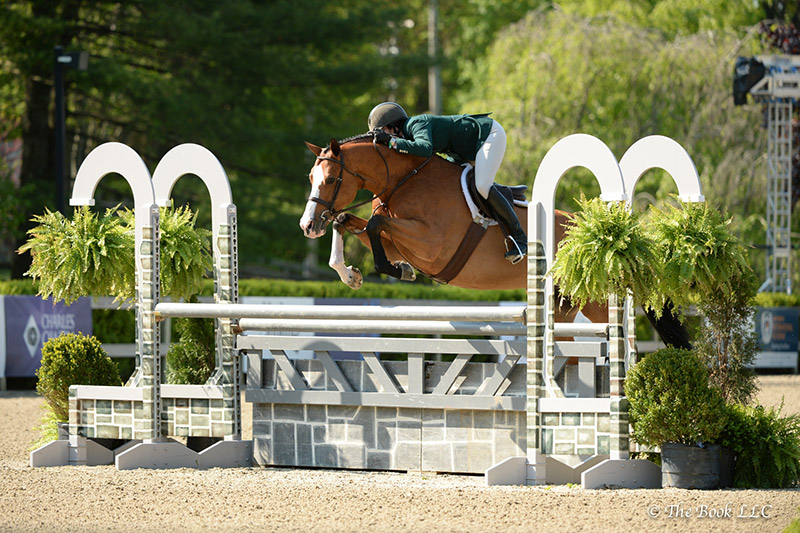 Griffith of Heritage Farm in Katonah, NY, piloted Fetching in the High Performance Conformation Division and earned two first-place and a second-place ribbon over fences, and won the model, handy, and under saddle to be named champion. The nearly perfect performance clinched the Grand Hunter Championship for Fetching and owner Lexi Maounis, who also competes Fetching in the Amateur-Owner Hunter Division.

“He has been a great horse for us,” said Griffith of the eight-year-old Holsteiner gelding by Catoki that she characterizes as a big stuffed animal in the competition ring. “He is so cute, and he always looks happy to do his job.

“He is so brave,” continued Griffith of Fetching’s strengths in the ring. “Any time you go in any ring, he pricks his ears and does his job.” 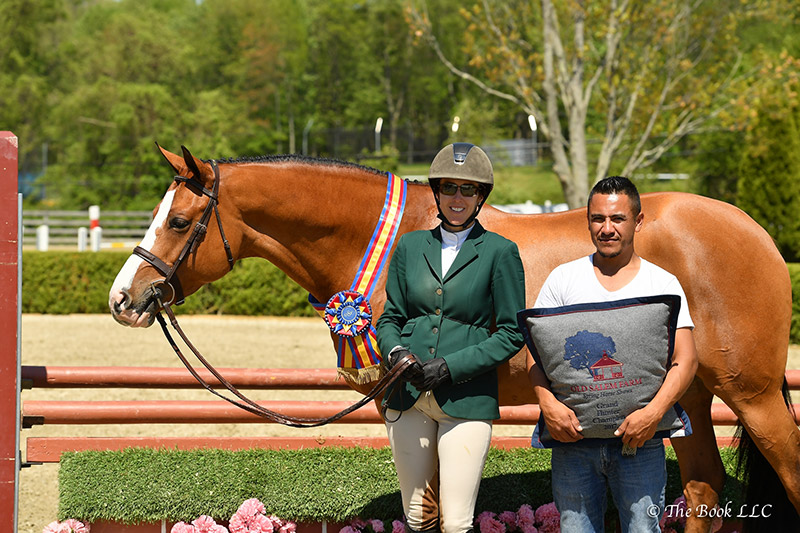 Patricia Griffith and Fetching, pictured with groom Humberto Valadez, were Champion in the High Performance Hunter Conformation Division, which won them a Grand Hunter Championship during the second week of the 2017 Old Salem Farm Spring Horse Shows at Old Salem Farm in North Salem, NY; photo © The Book

Heritage Farm groom Humberto Valadez is responsible for the care of Fetching, and Griffith was quick to give him credit for his hard work in preparing the horse for competition.

“I think with the conformation horses especially, the grooms get really competitive,” she said. “Humberto’s goal was to win the model and was very excited when he did. He is very particular about Fetching and takes pride in the horse doing well.”

Heritage Farm is well represented at the Old Salem Farm Spring Horse Shows with riders competing in hunter, jumper, and equitation rings. The event is a highlight for Griffith, who looks forward to the show each year. She said, “We love this show because it is so close to home, but also because the facility is such a wonderful place!”

Reserve champion honors in the High Performance Hunter Conformation Division were presented to As Promised, ridden by Louise Serio of Kennett Square, PA, and owned by Bryan Baldwin & Meralex Farm, Inc. As Promised jumped to two second-place ribbons and a win over fences, in addition to placing second in the handy, second in model, and winning the under saddle. 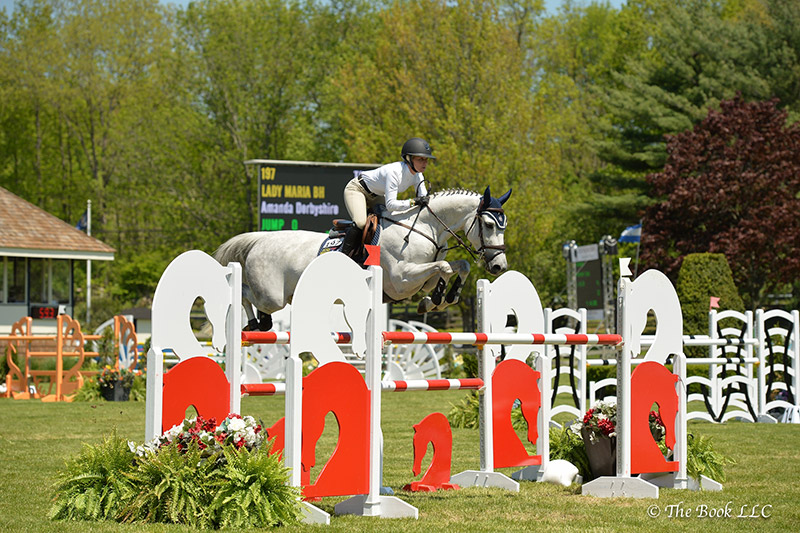 Derbyshire and the 11-year-old Holsteiner mare (Cartani x Corrado I) were one of 15 double-clear rides and crossed the jump-off timers in a blazing 27.712 seconds for the win. Nearly two seconds slower, Peter Wylde (USA) placed second riding Aimee for Aram Ampagoumian, LLC in 29.163 seconds.

Derbyshire got the ride on Lady Maria BH nearly two years ago and has piloted the mare to success in a range of classes from speeds to grand prix events.

“There is nothing not to like about her,” said Derbyshire. “She’s fast, careful, easy, and she never does anything wrong. She has the sweetest personality, and we all love her. She is one of the nicest horses I have ever had.”

While Derbyshire will pilot Lady Maria BH throughout the spring season, the mare will soon transition to be the ride of Sophie and Mimi Gochman in the High Junior Jumper Division.

“It is a little sad for me, but very exciting for the girls,” said Derbyshire, who is currently focusing on FEI competition to boost her world ranking points and will compete in CSI3* classes this week at Old Salem Farm. “I love showing on grass, and this is only of the only places we get to do that. It is so nice to come back [to Old Salem Farm] each year for these shows.”

Open Jumper competition continues on Thursday with the $10,000 1.45m before FEI competition kicks off with the $35,000 Welcome Stake of North Salem CSI3* on the Grand Prix Field. In the Main Hunter Ring on Thursday, the Grand Adult Amateur Hunter Champion will be crowned.

Spectators are welcome at the Old Salem Farm Spring Horse Shows. General admission to Old Salem Farm is free Wednesday through Friday. On the weekend of May 20-21, admission is $15 for adults and $10 for seniors and children under 12.